The Yamato-kan was the original museum building in 1977 up until the addition of what is known as the main museum building in 1993. Roughly 2,000 sq. foot building at the heart of the gardens, has stood as a symbol of Japanese culture and architecture. Loosely based on the famous 17th century Katsura Imperial Villa-still existing in all its splendor in Kyoto, Japan. The detached royal residence is known for its careful balance of proportions and all-natural materials, which are key to the overall aesthetics of the buildings and picturesque gardens associated with Japan.

Yamato was the name of the original village of Japanese settlers who farmed a large area of land in Boca Raton starting in 1904. The word means, “great peace,” and the early immigrants felt it an appropriate name for their new home. “Kan,” means building and is often seen as a suffix to place names in modern Japan.

Inside, guests find three short documentaries ranging in length from five to 15 minutes.  These videos highlight the stories of the Yamato colonists, George Morkami – our namesake, and Hoichi Kurisu – the Japanese landscape garden designer. Another feature allows visitors to explore some of the recently digitized materials from the Museum Archive collection associated with the original founders, their families, friends, neighbors, some local newspaper clipping, and excerpts from Tamemasu ‘Henry’ Kamiya’s diary from over 100 years ago. 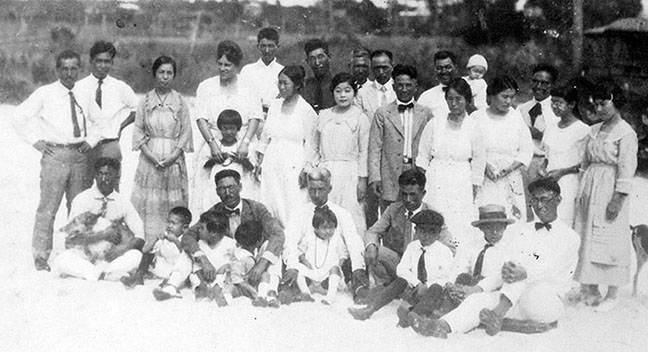 Discover the history of our founder, George Morikami, and the community of pioneering immigrants that once settled in Palm Beach County. Written by our former Curator and Cultural Director, Tom Gregersen.