Masks play a wide role in Japanese culture. They are worn for play, amusements, folk dances, theatrical performances, and even for protective armor. If you attend any of Japan’s large festivals, you will undoubtedly find a booth selling a variety of facemasks (仮面, kamen). Some of the familiar characters you will find are from folk tales, myths, legends, animals, and anime characters.

Traditionally facemasks were made of papier-mâché, wood, lacquer, or even metal. The papier-mâché technique developed as the most common method for making masks used by the public.  By the Meiji period (1868-1912), plastic had been introduced to Japan and many items once handmade by local artisans were now being mass-produced in factories. Plastic masks for playing and celebrating came to be widely available at shops and festivals. You can even find ‘joke masks’ (like a big nose and fake glasses) just to make your friends laugh! 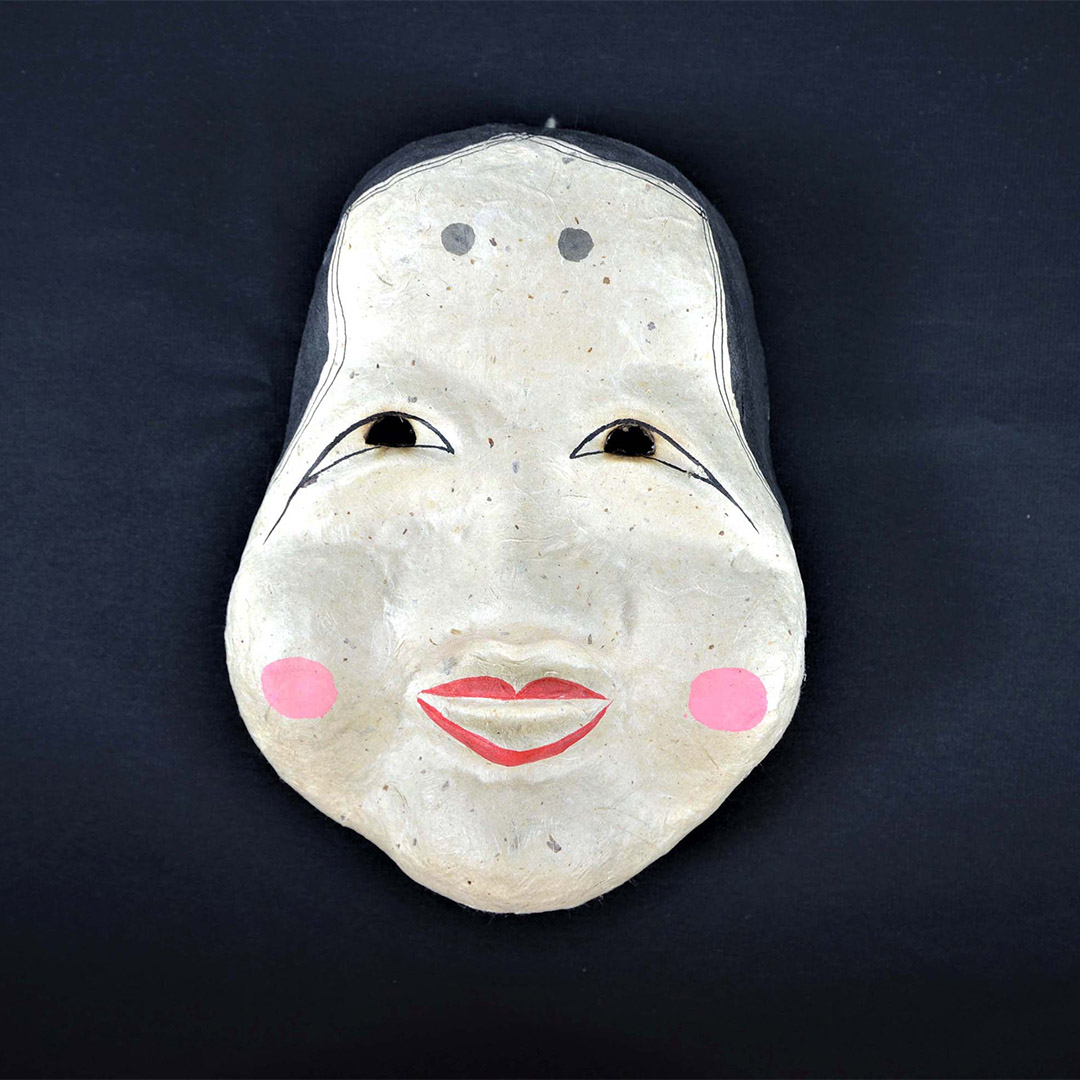 Okame, sometimes called Otafuku, is a beloved folk deity. Associated with fertility, this plump, good-natured character has a simple earthy beauty and is believed to embody the qualities of an ideal wife. 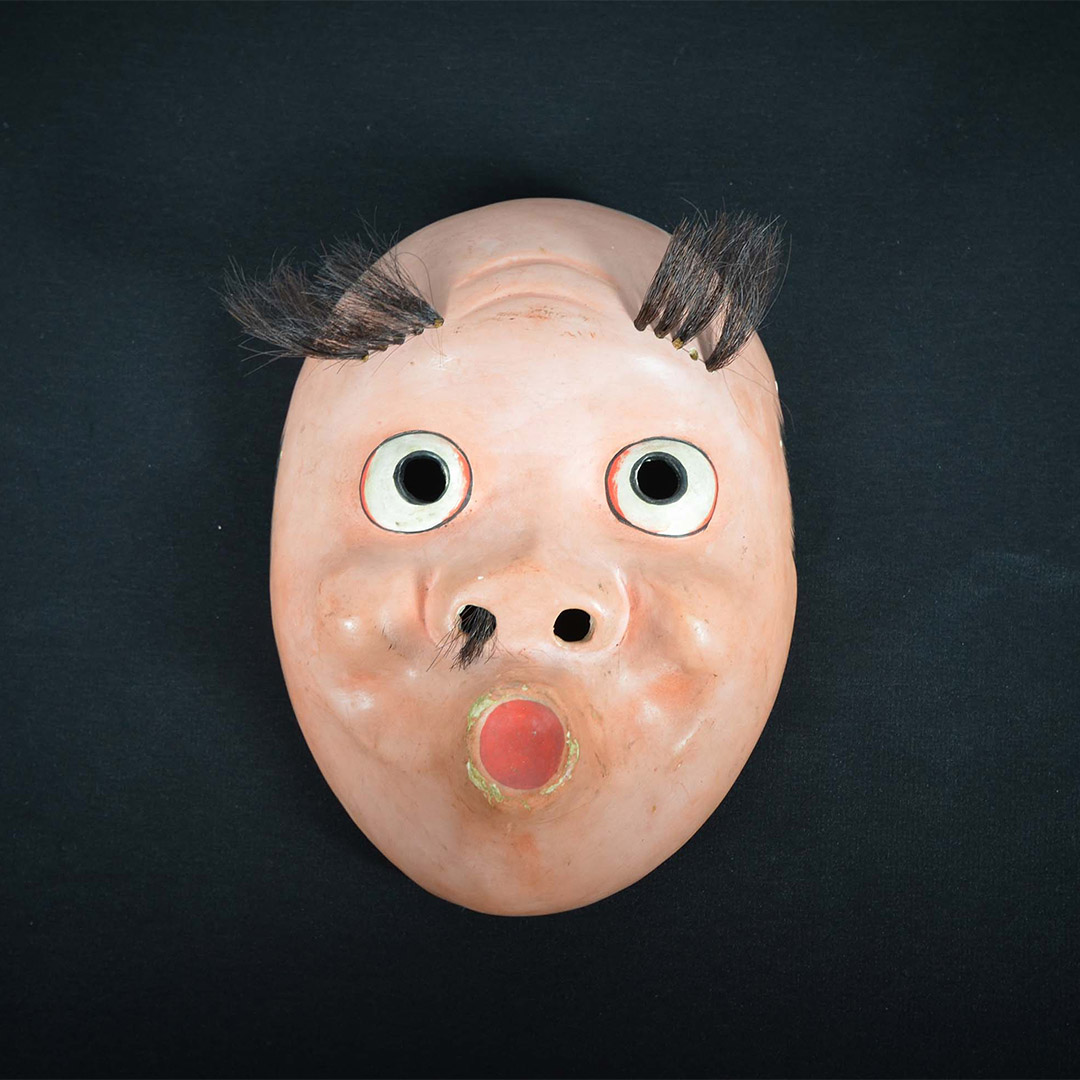 Hyottoko, literally “fire-man,” is a popular folk character. His origins are unclear but many legends also associate him with prosperity. He is always perceived as a sort of clown or jester, and is frequently associated with silly dances.

Gift of Jody and Denny Scruggs 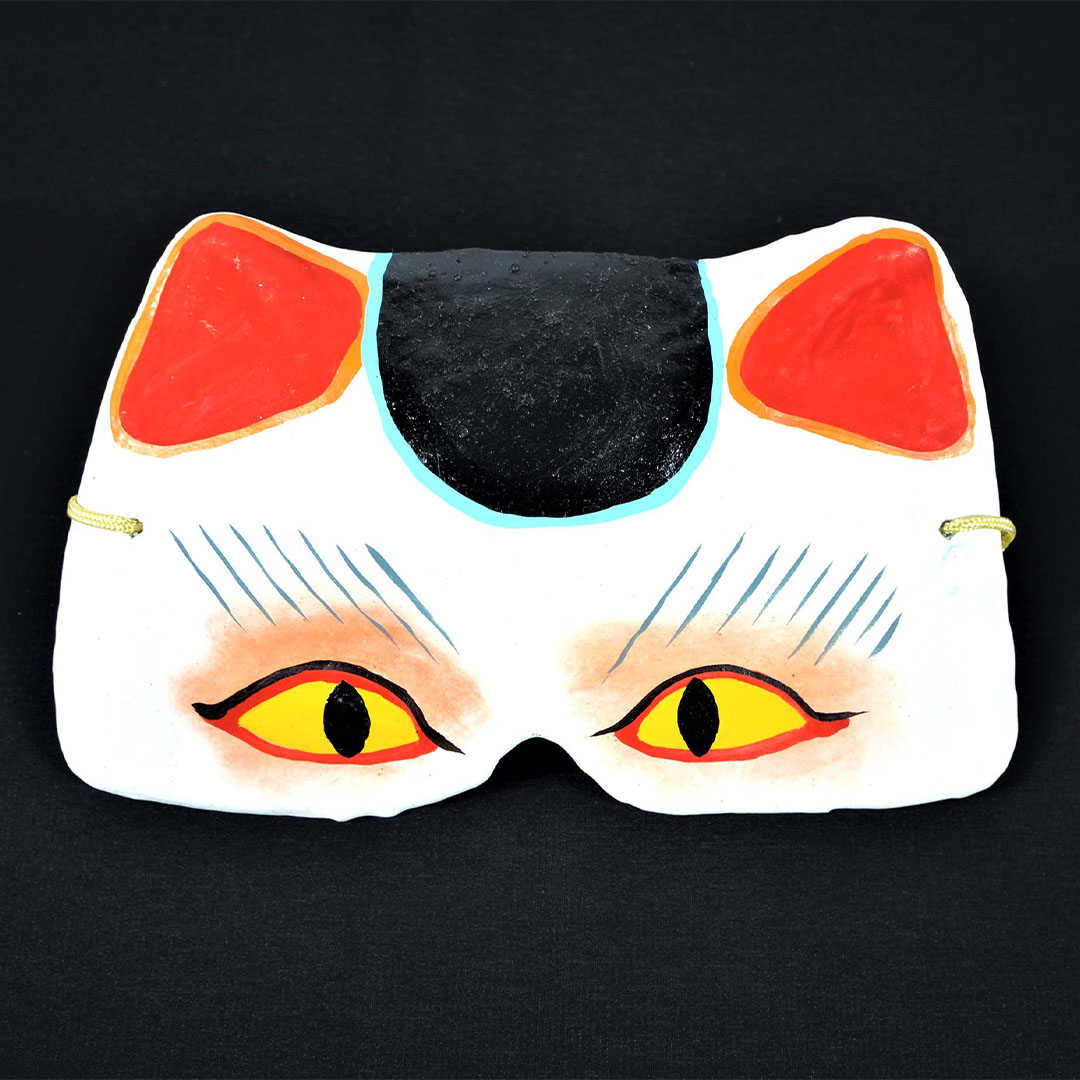 Igarashi Kenji is a well-known papier-mâché doll maker in Saitama, Japan. He is a second-generation doll maker and his son Shunsuke is continuing the traditions of the family studio. This half-mask features the face of a cat (neko), a symbol of good luck and prosperity in Japan. 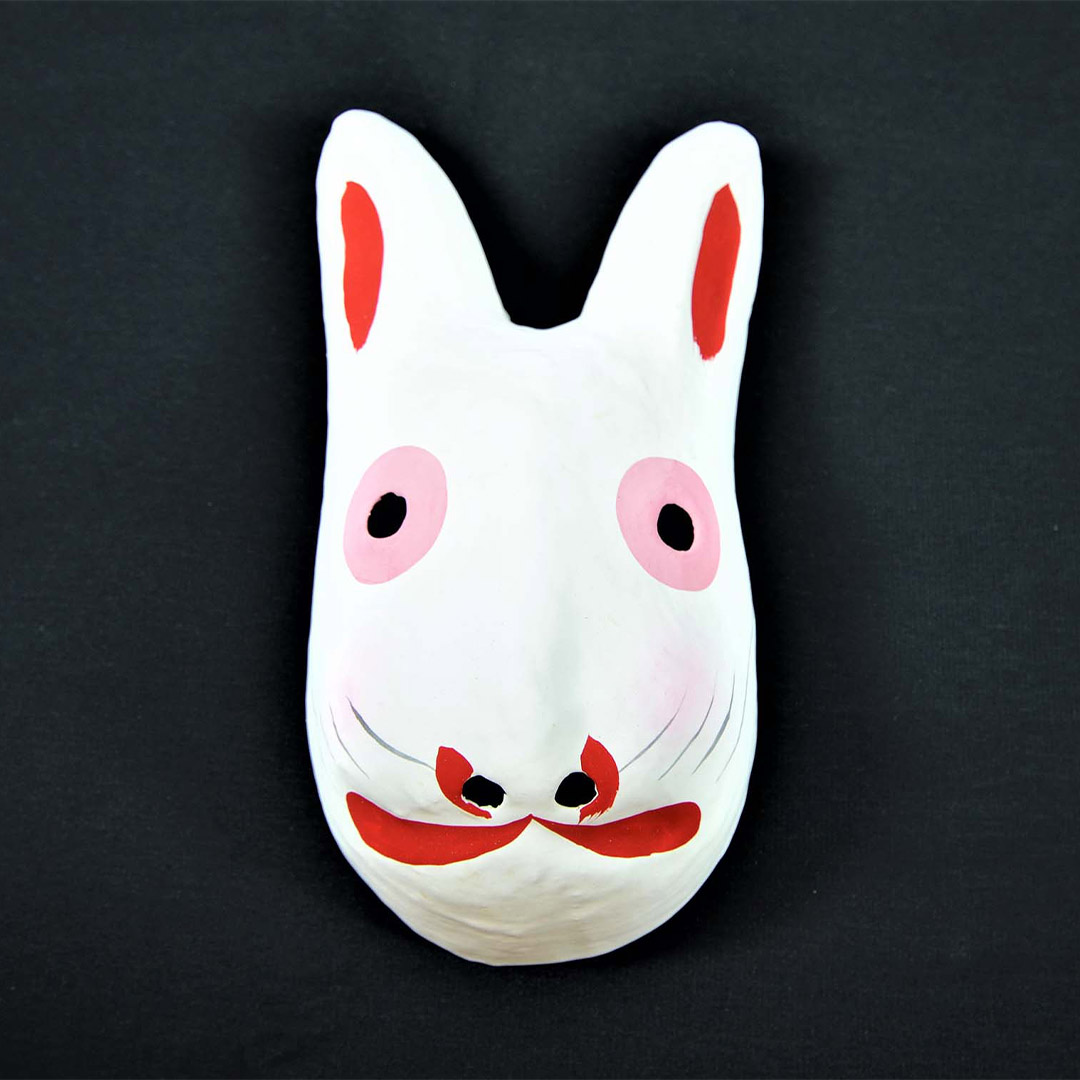 In Japanese culture, the white rabbit (usagi) is associated with the moon. Rather than a ‘man in the moon,’ the Japanese envision a rabbit pounding rice cakes (mochi). 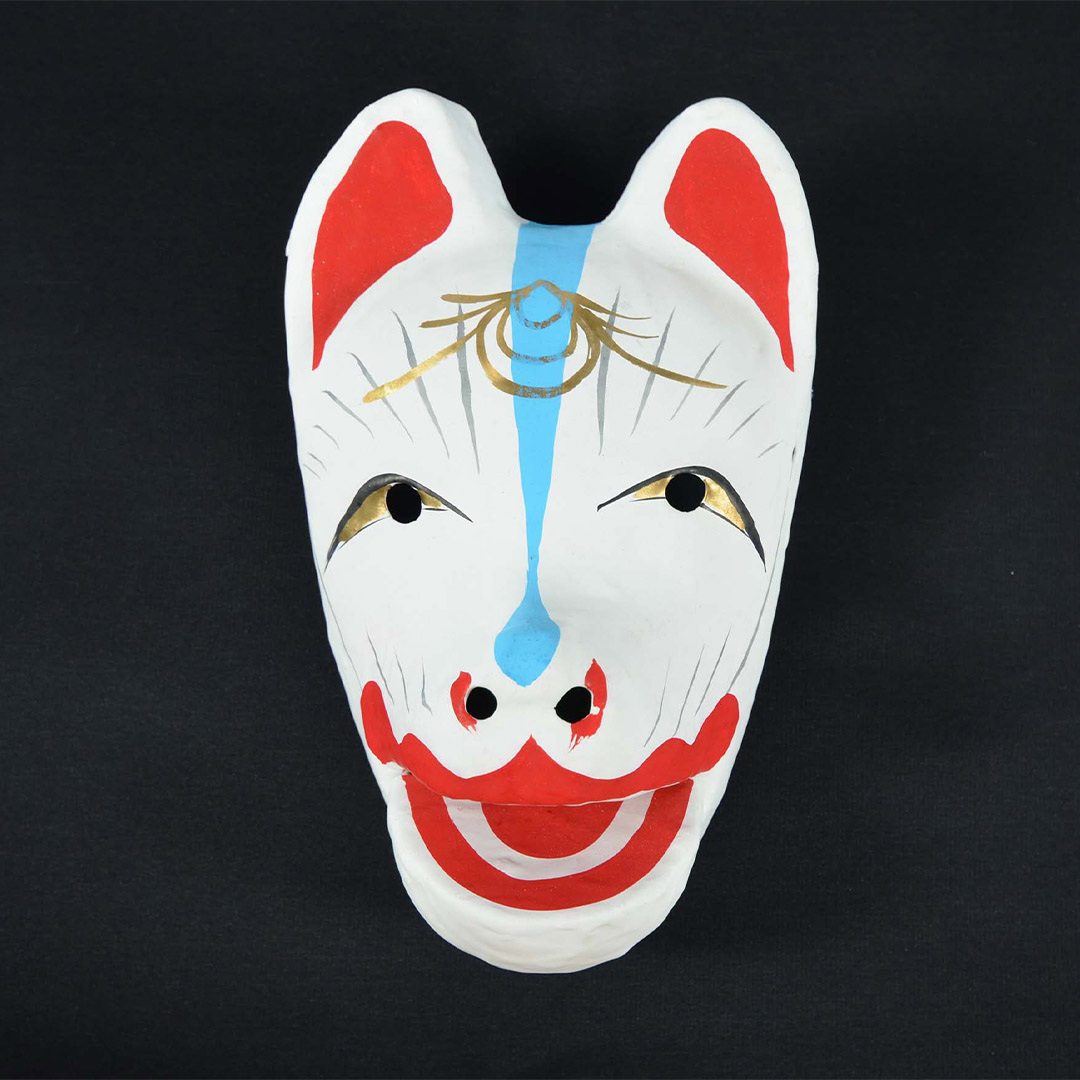 The fox, or kitsune, is considered to be a messenger of the gods. This particular mask has a flaming jewel on its forehead associating it with the Shintō deity, Inari (God of Rice), as he is often depicted riding a white fox. This mask has a moveable jaw. 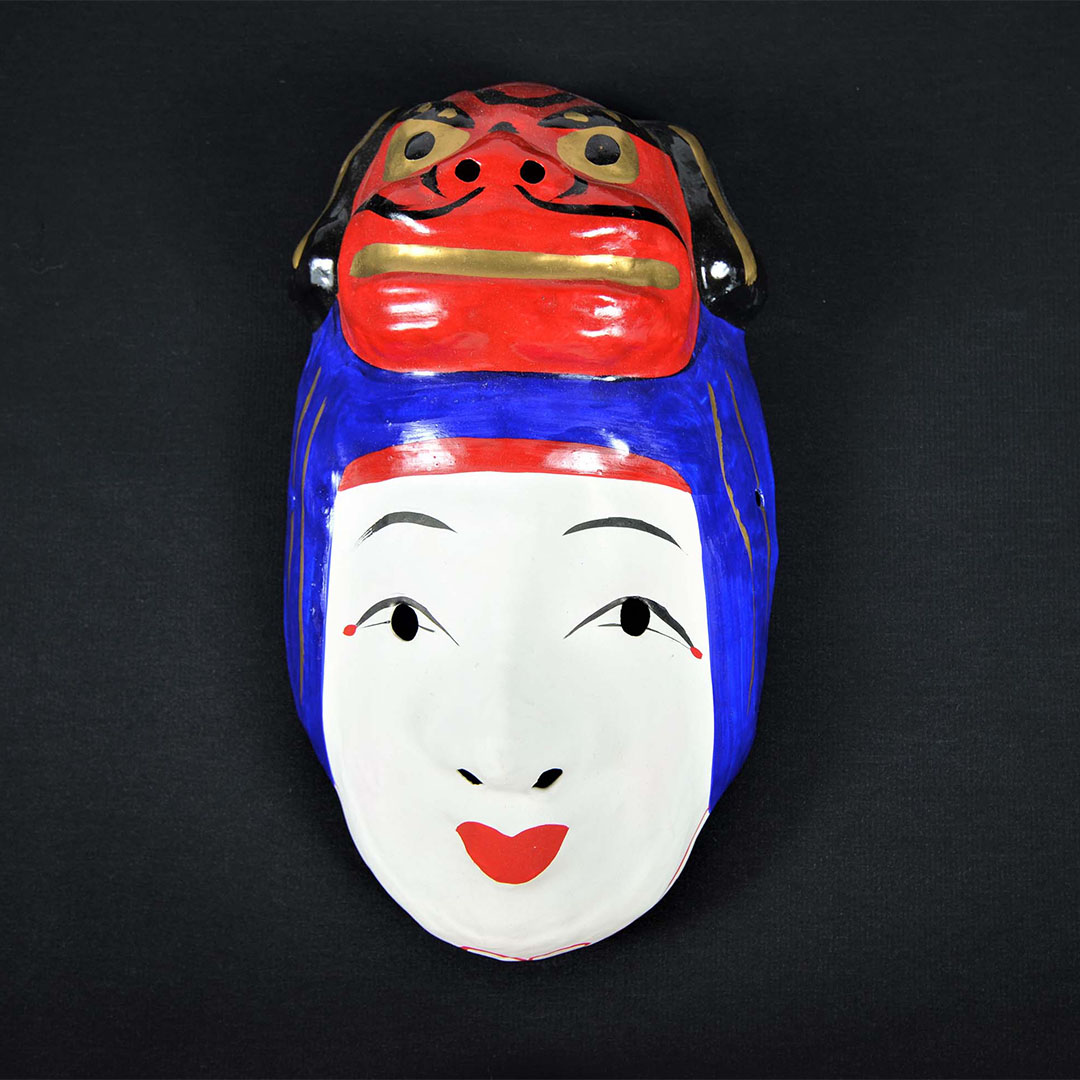 This mask depicts a woman wearing a shishi-gashira, or ‘lion-head’ mask. Shishi, sometimes called lion-dogs, are guardian figures that usually appear in pairs. You can often find one with mouth open on the left and one with mouth closed on the right at entrances to important buildings. The lion dance is also a popular element of New Year celebrations. 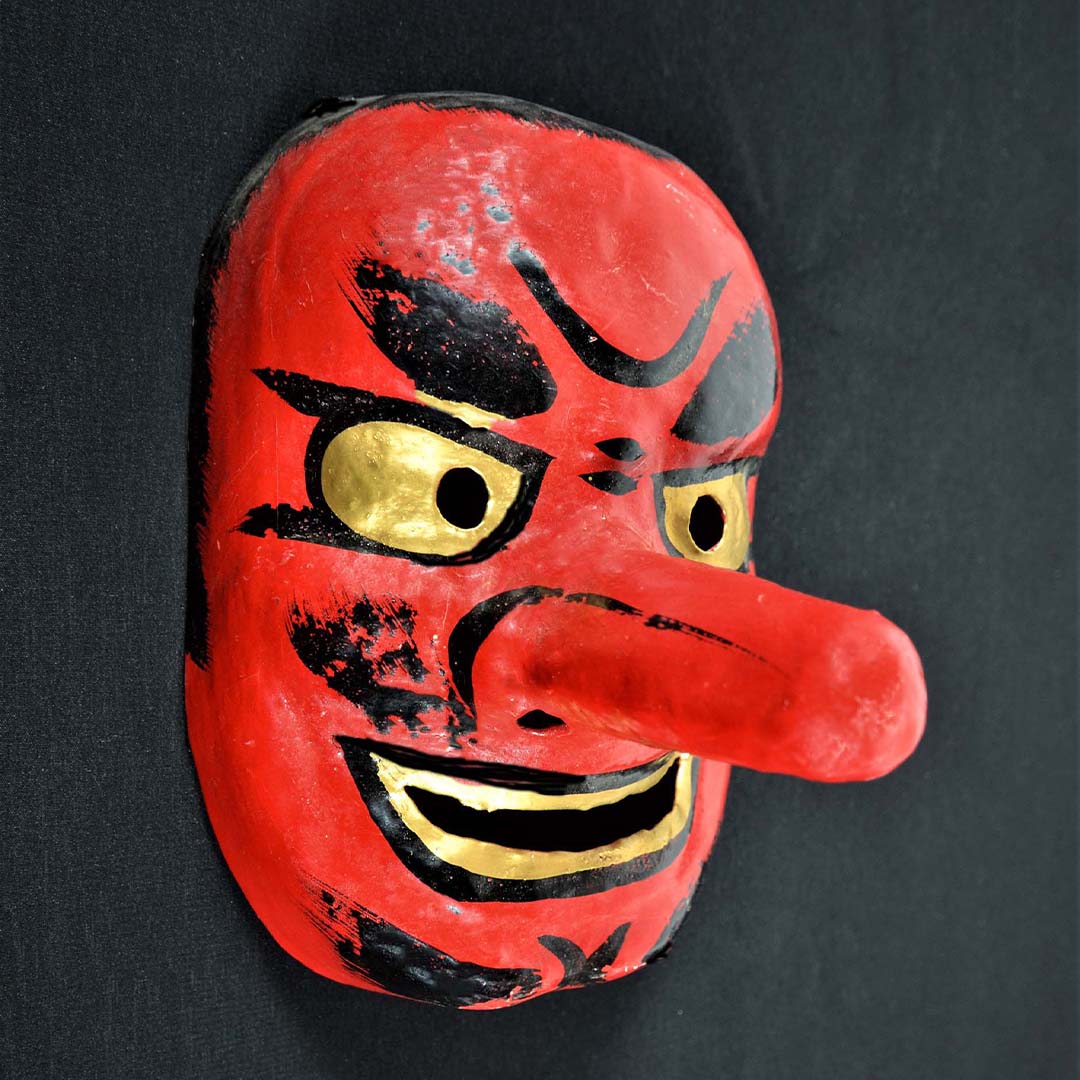 Tengu are mythical creatures that are said to live deep in the forests and mountains of Japan. They train worthy samurai in the magical arts. They have elements associated with both Shintō and Buddhism. 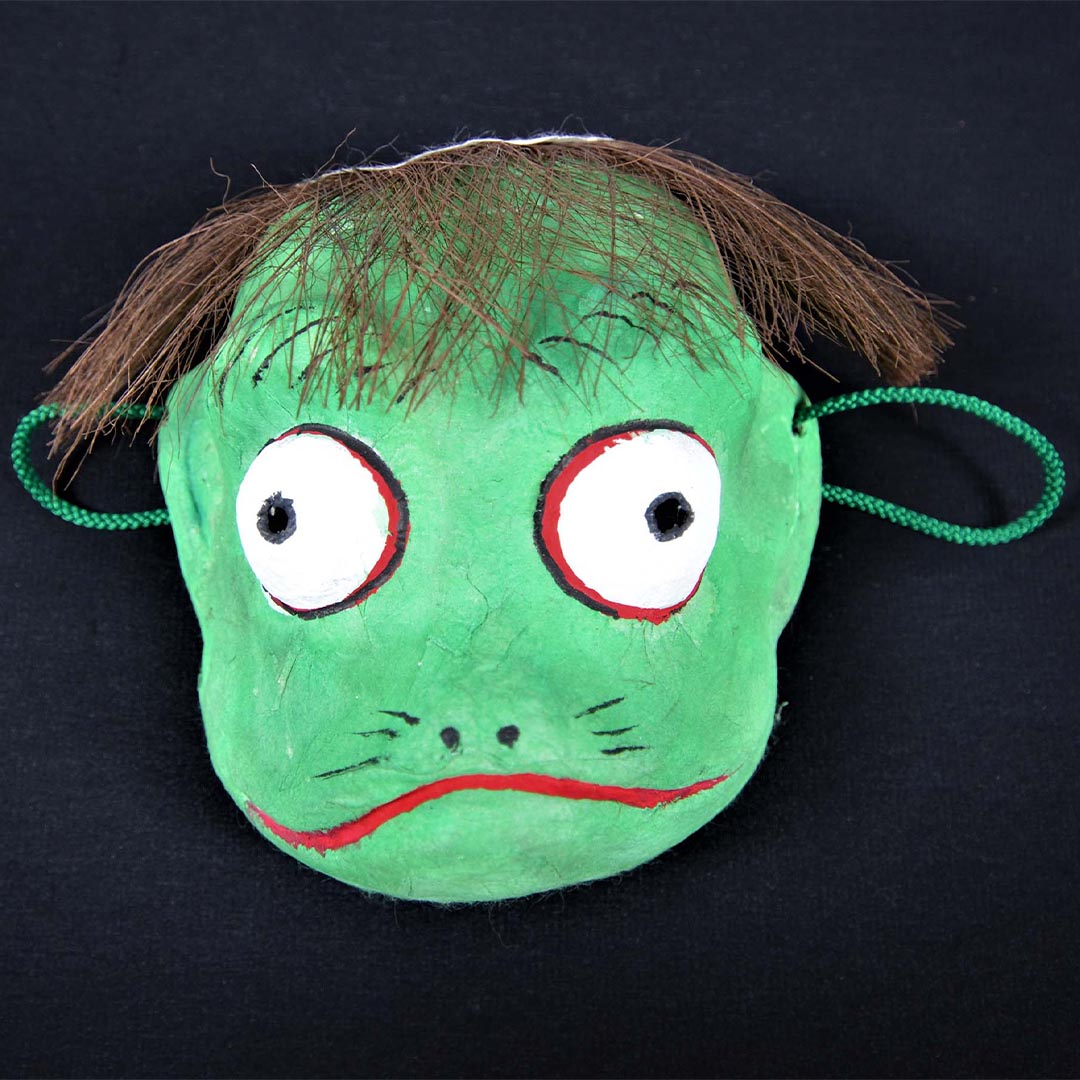 Kappa are mischievous water-dwelling creatures in Japan. Parents often remind children of this creature to scare them into being careful near water. 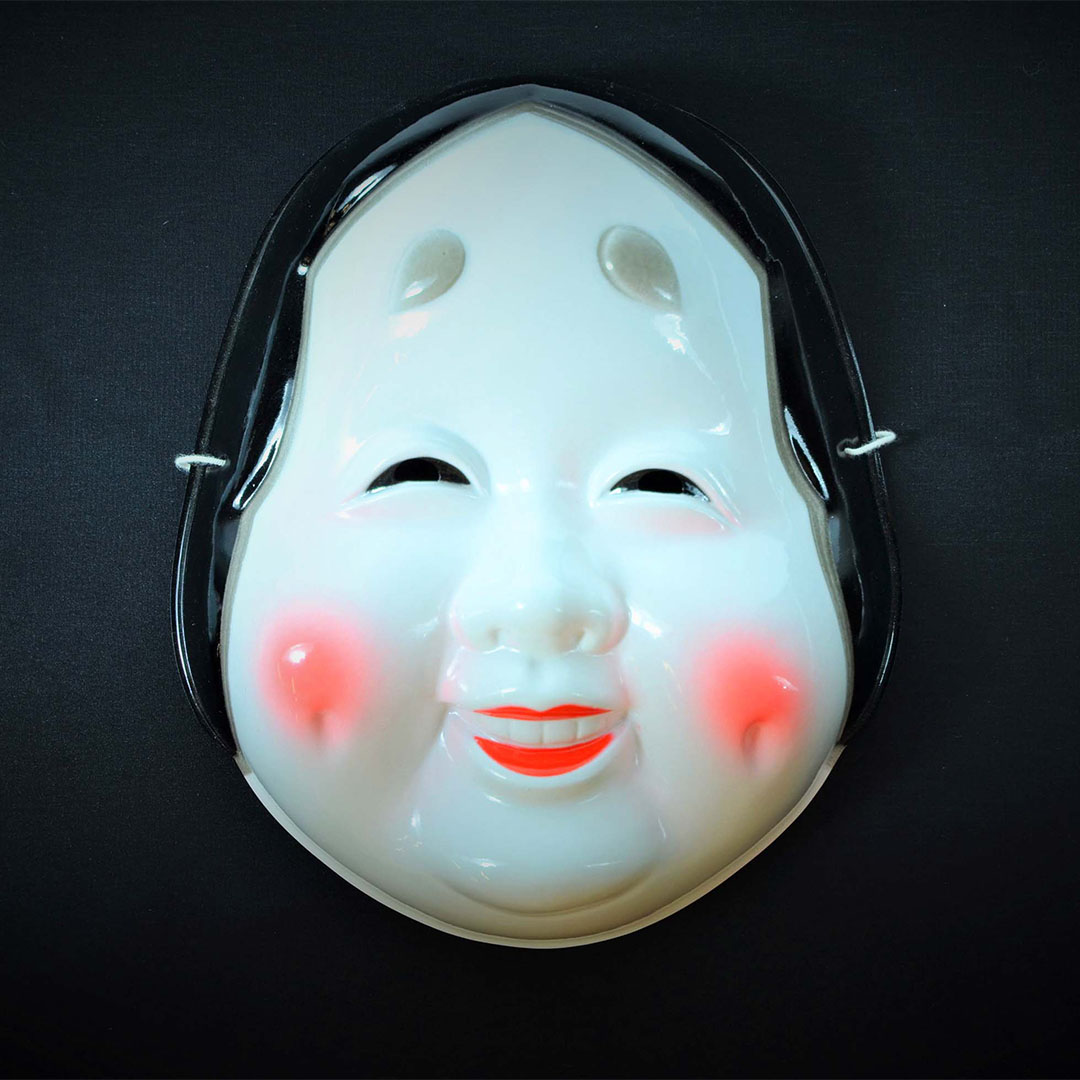 Okame, or Otafuku, depicted here in a plastic form showing us that she has transitioned from a deity and theatrical character to more of a pop culture figure. 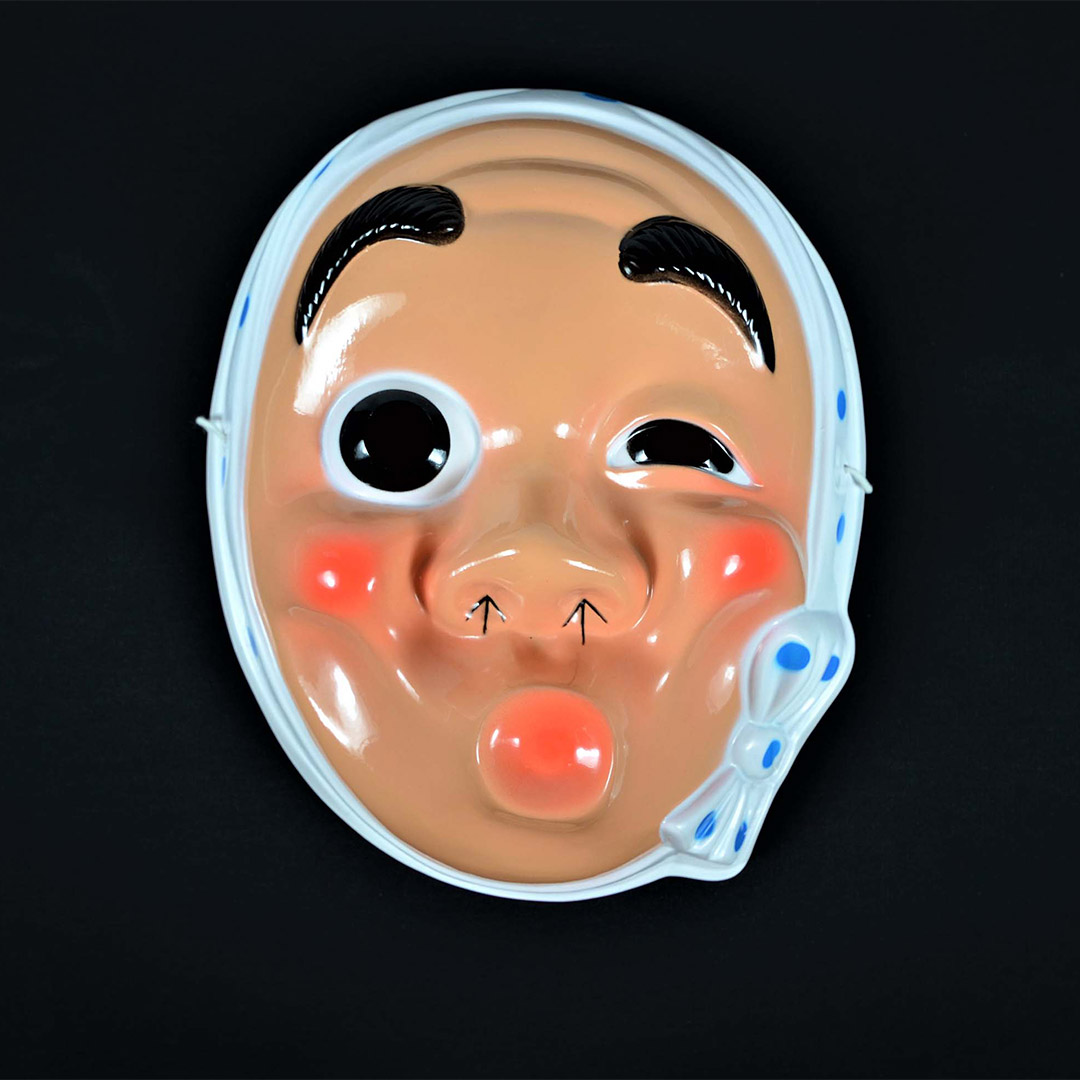 The clown, or jester, originally linked to theatrical performances has shifted to a more common folk character. 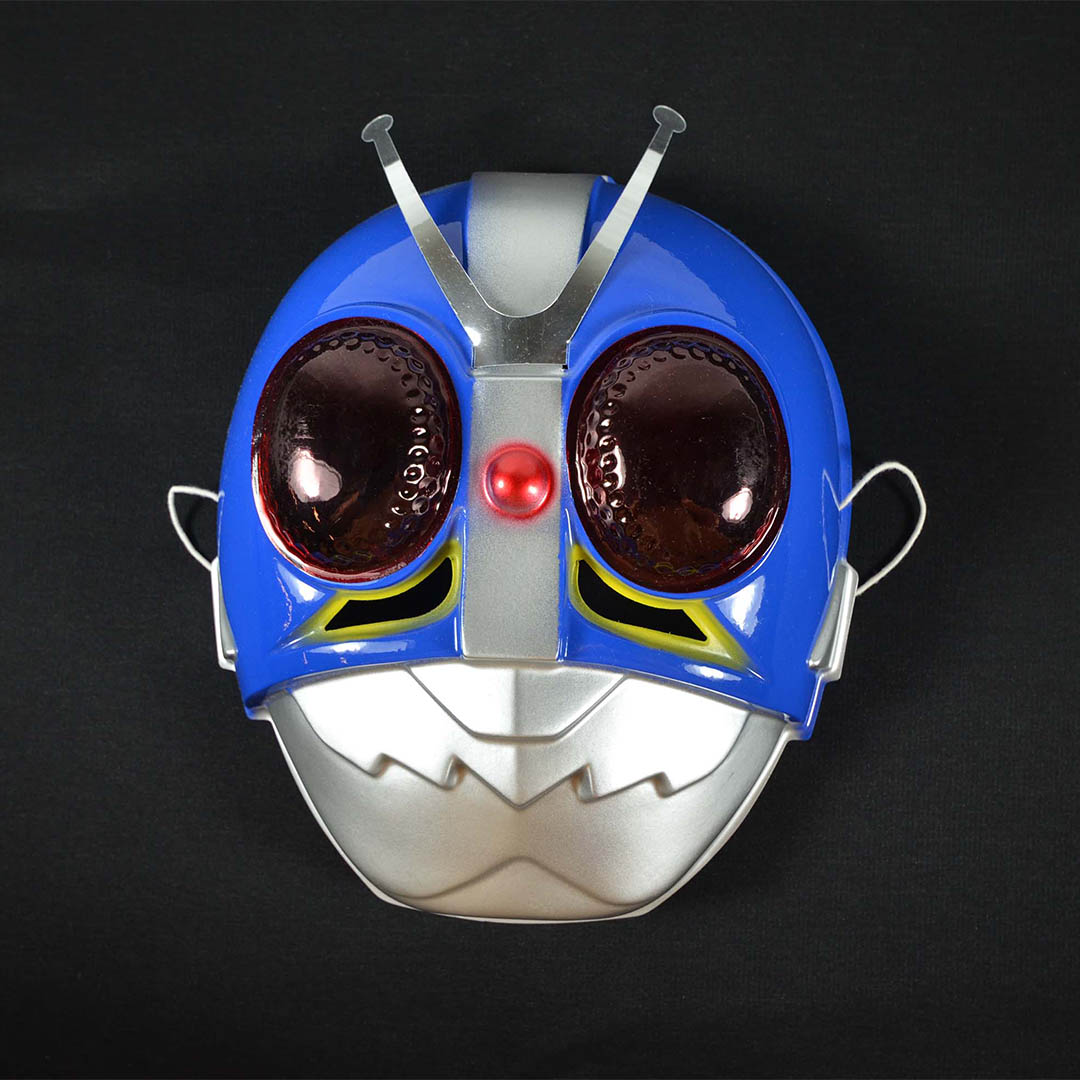 Kamen Raidā is a TV series created by manga artist Ishinomori Shotaro in 1971. The main protagonist is a motorcycle-riding human who is part grasshopper (or dragonfly) with super powers. He and two other riders fight the evildoers of Destron to save the world. 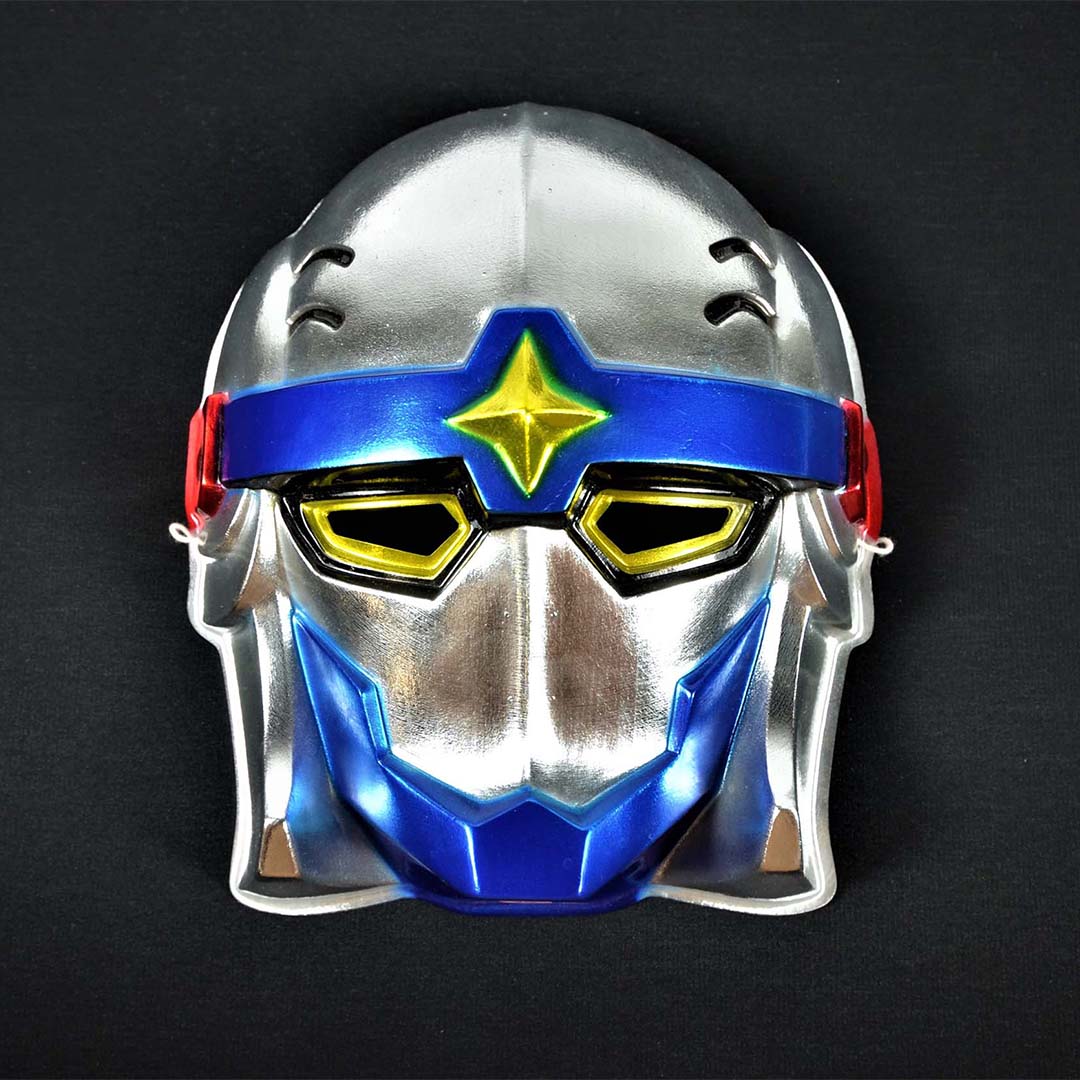 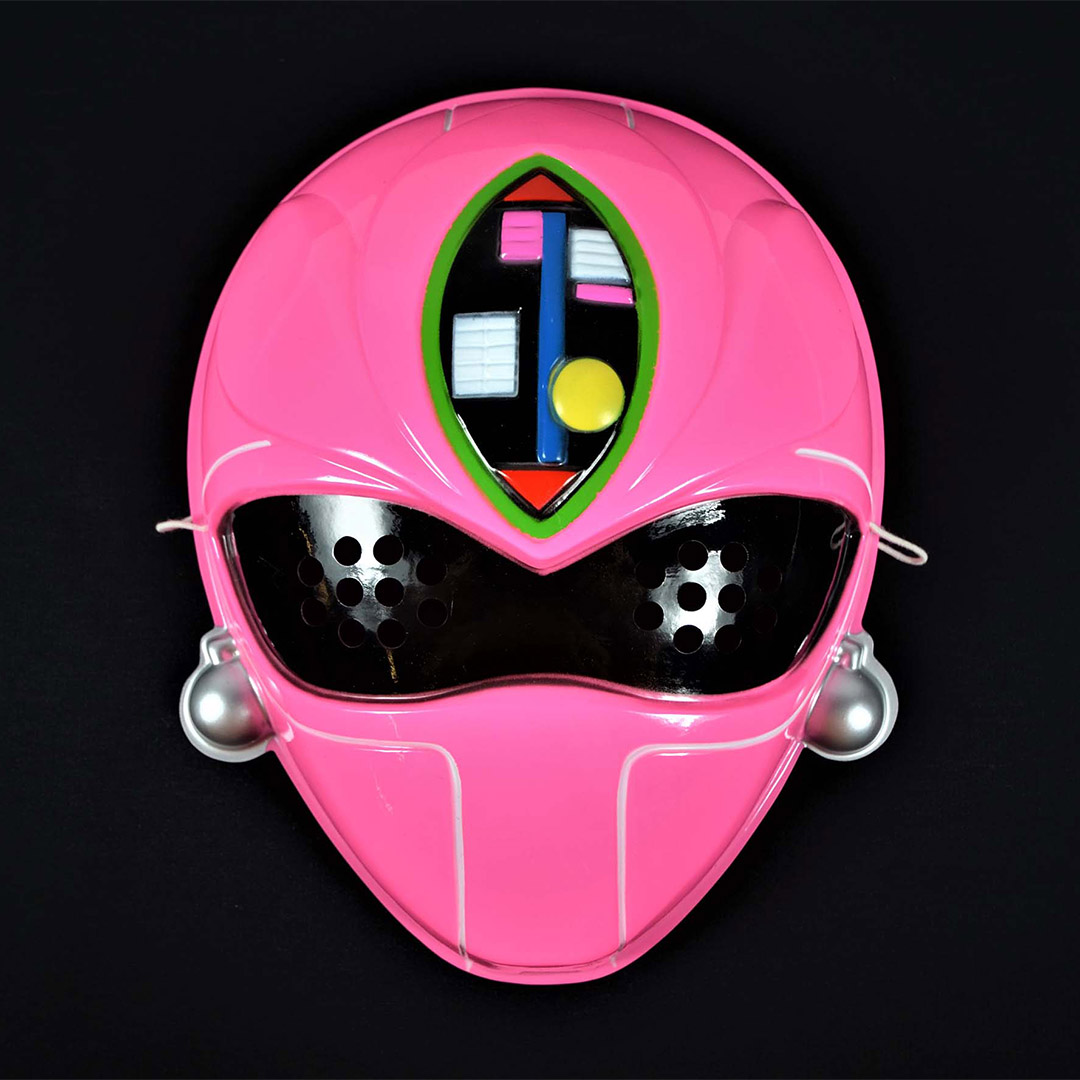 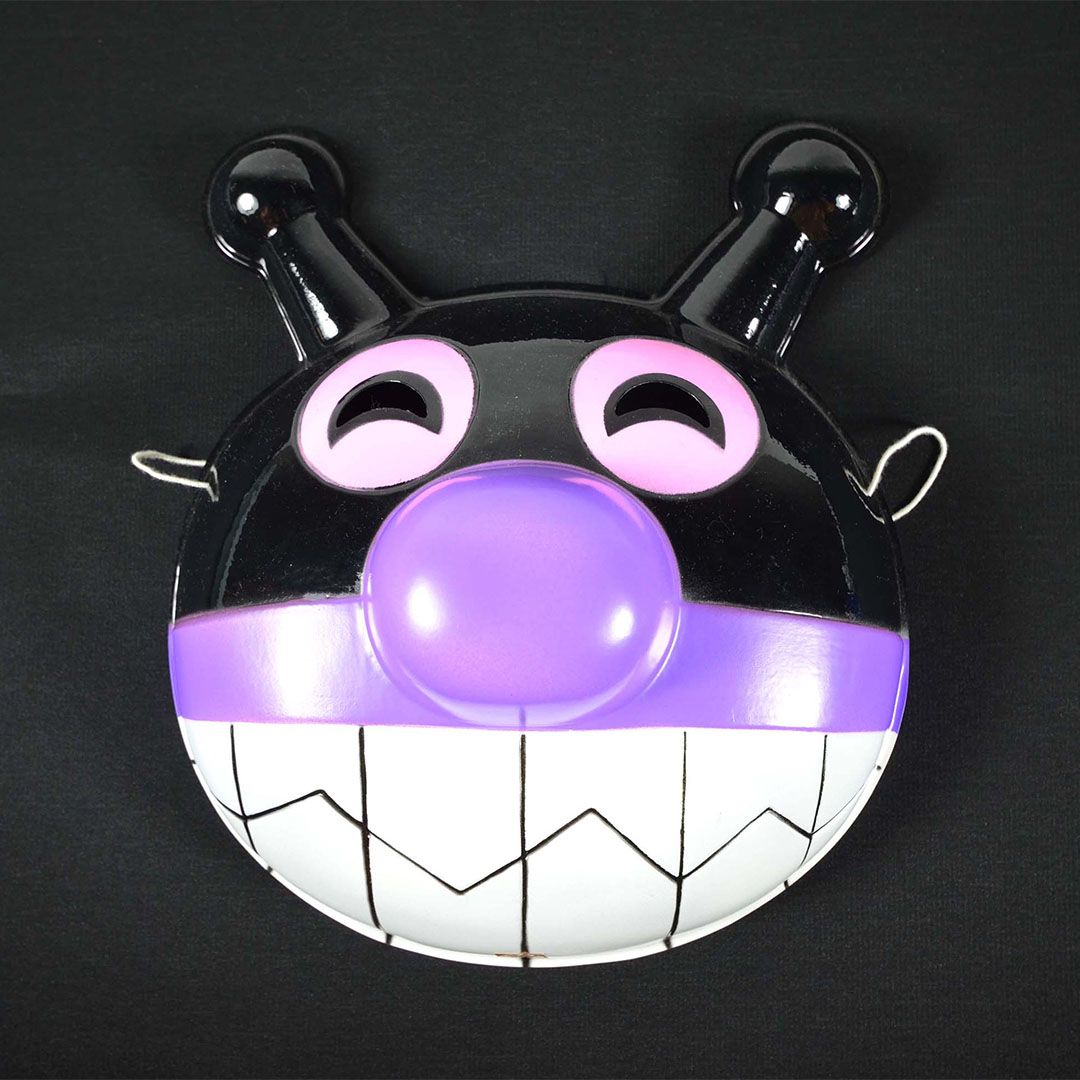 Baikinman (or “Germ-Man”) is the nemesis of the famous Japanese cartoon character, Anpanman (or “Sweet Bean Bread-Man”), who first appeared in a children’s book in 1973. The creator, Takashi Yanase, passed away in 2013 at the age of 94. Baikinman came from the Germ Planet to enslave the people of Earth, but Anpanman is always there to save the day. 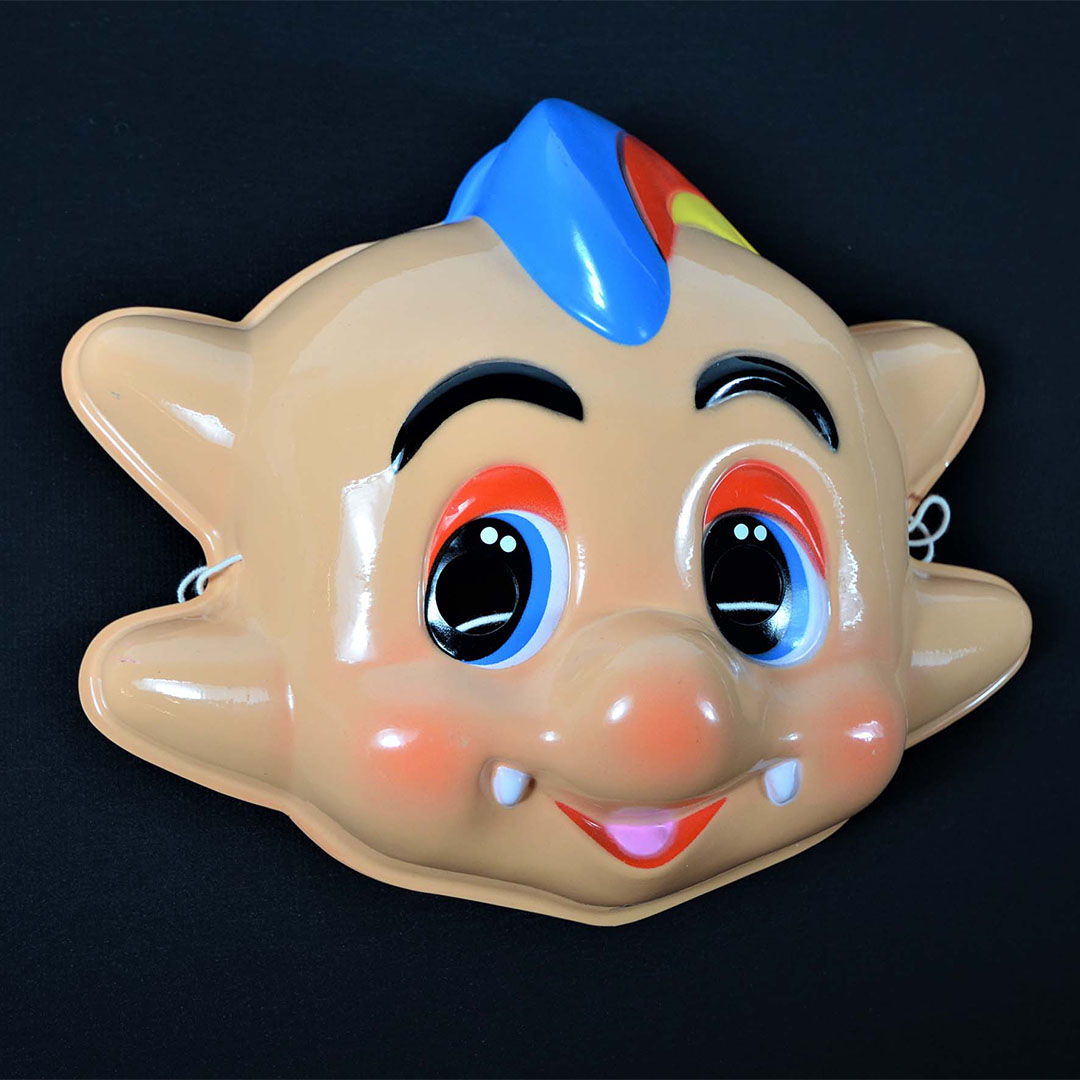 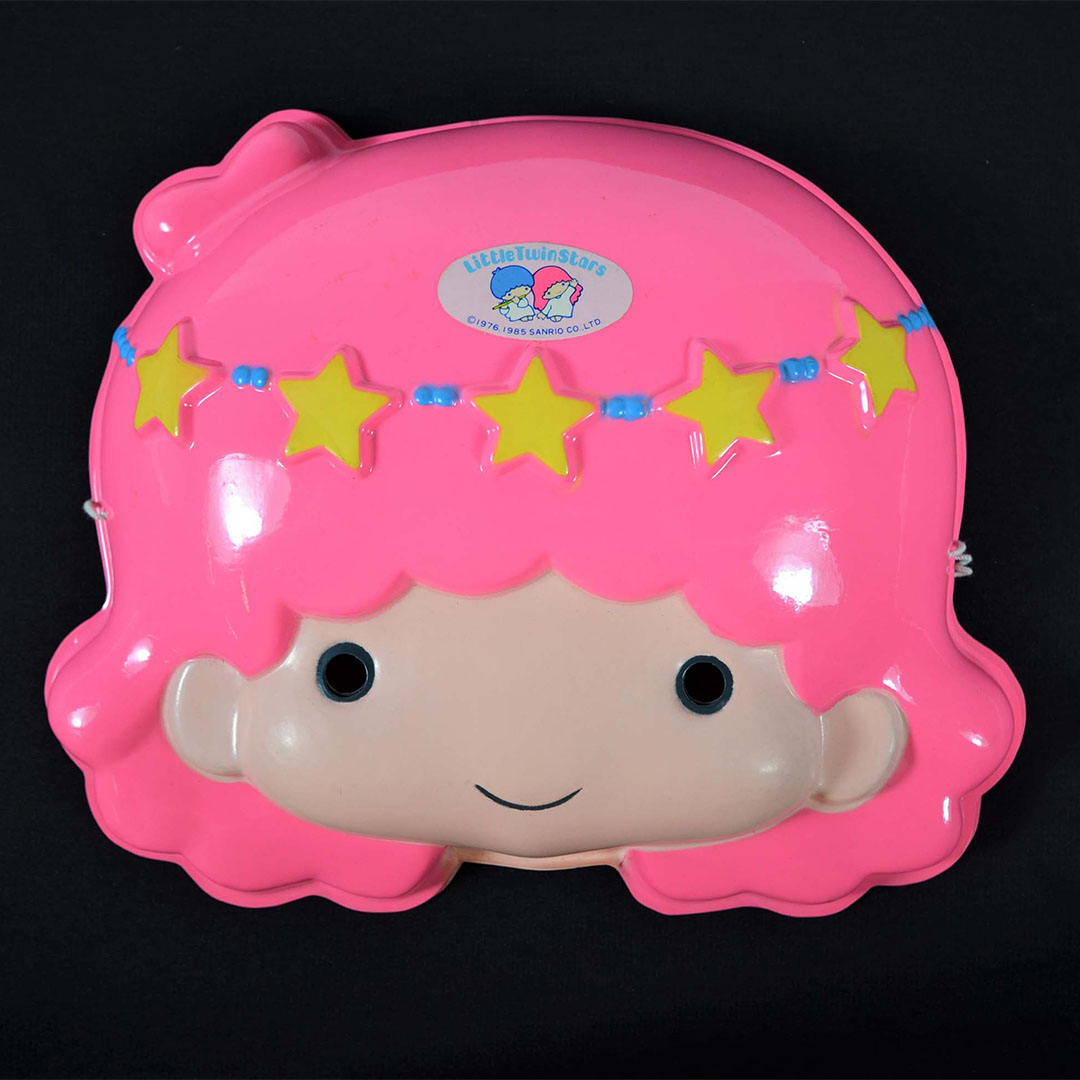 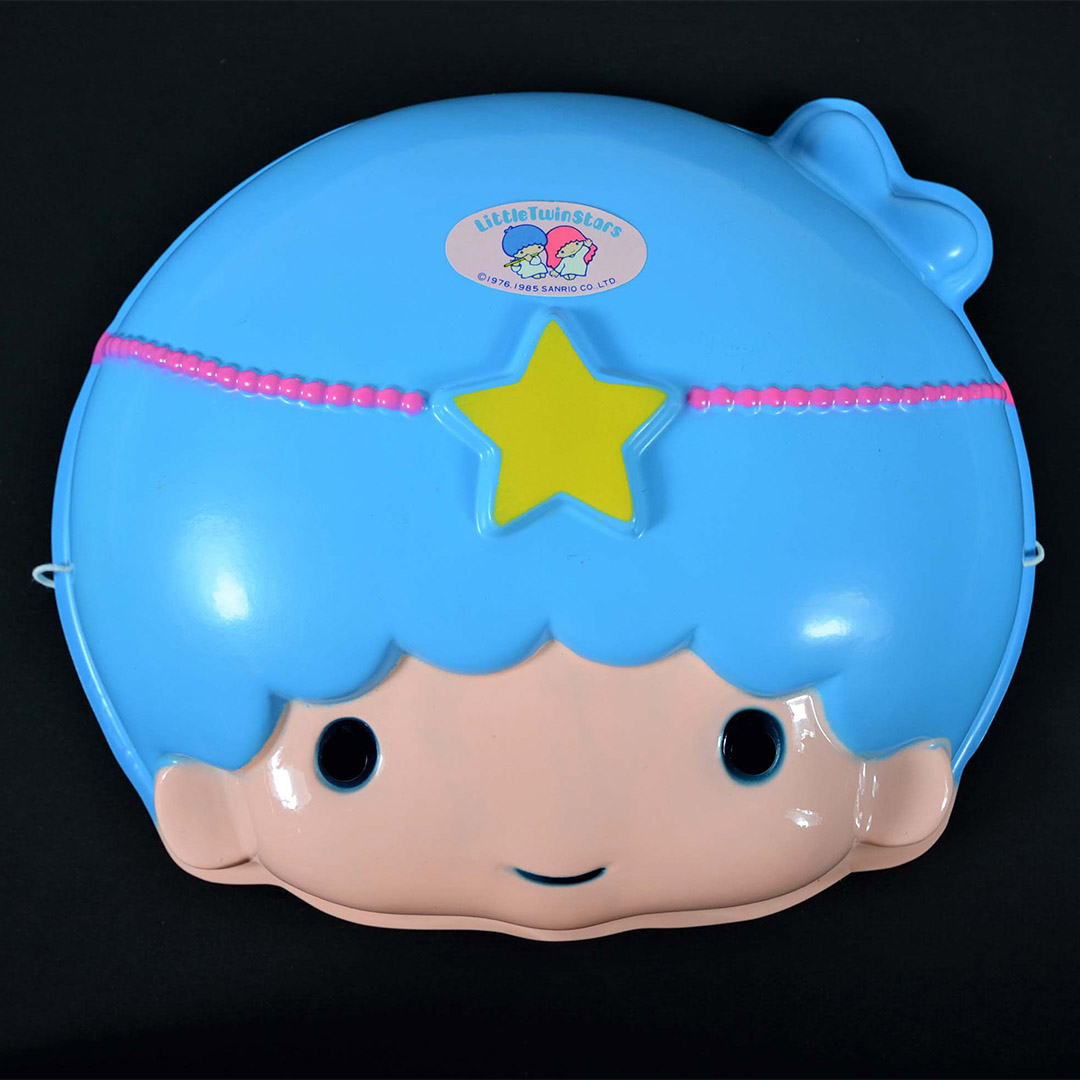 Little Twin Stars, Lala and Kiki, are a Sanrio franchise that began in 1975. Sanrio is the company that developed Hello Kitty and other characters that are now popular worldwide. 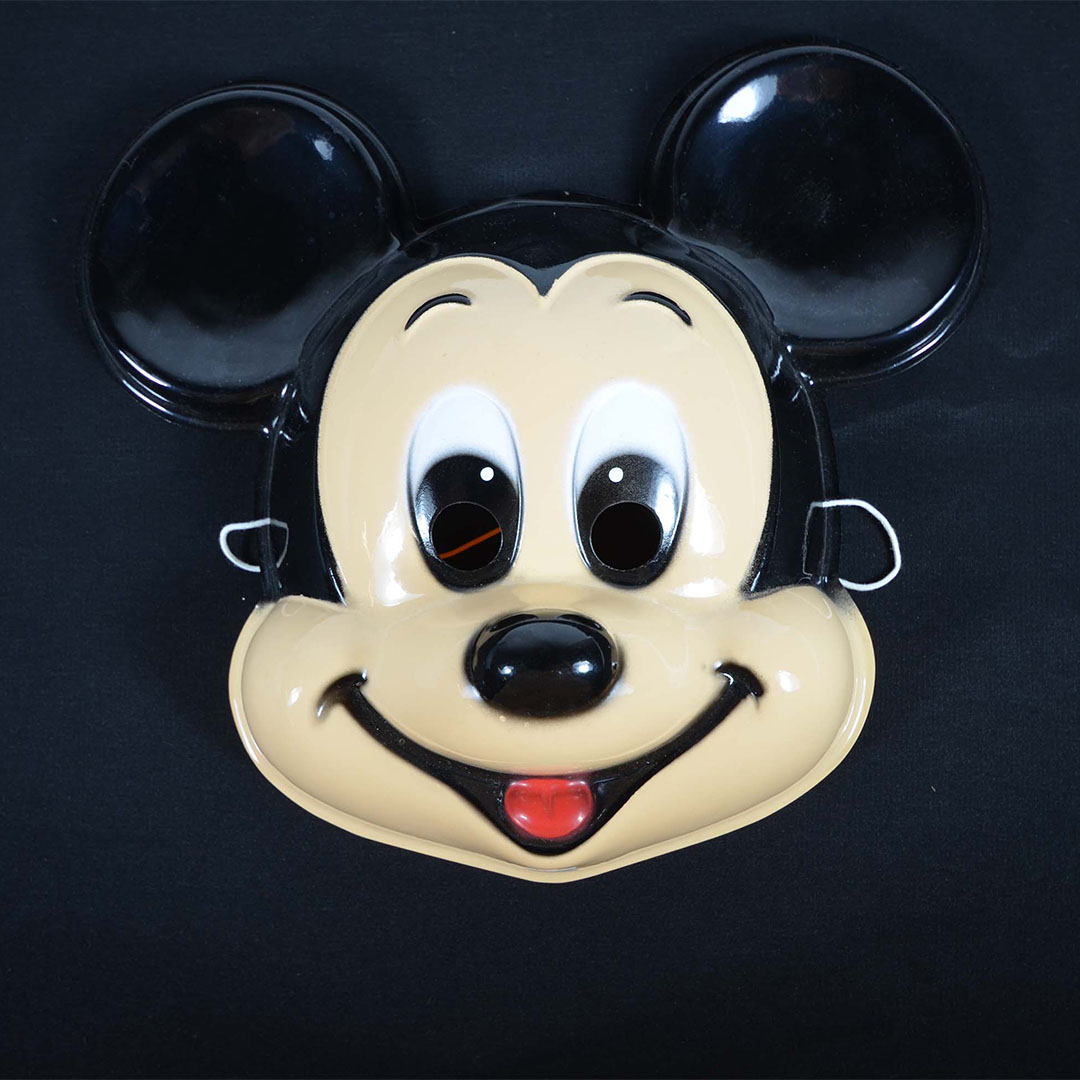 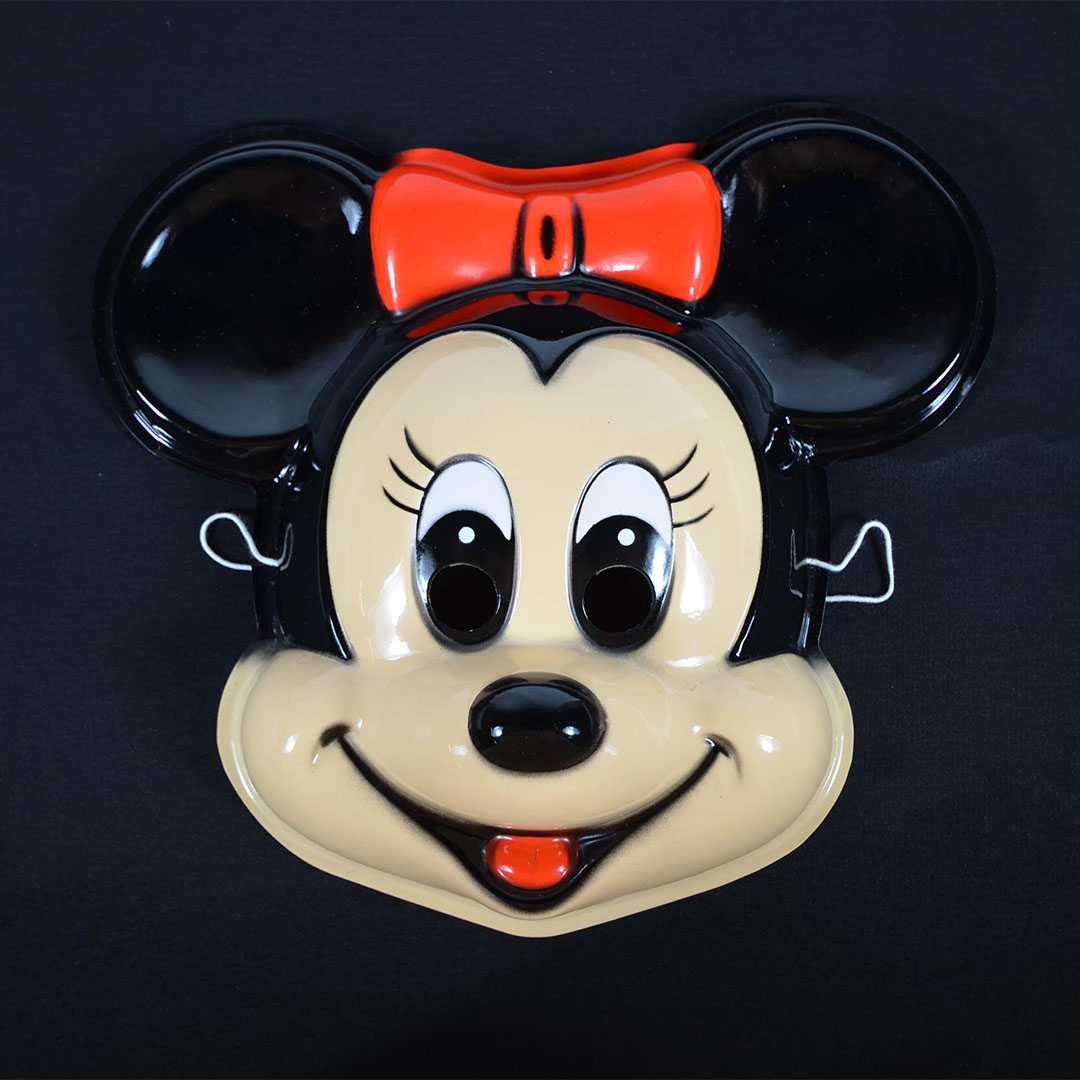 The Walt Disney characters Mickey Mouse and Minnie Mouse first came to Japanese movie theaters in 1931. Since that time, there has been a great deal of influence back and forth among animators in Japan and the U.S. 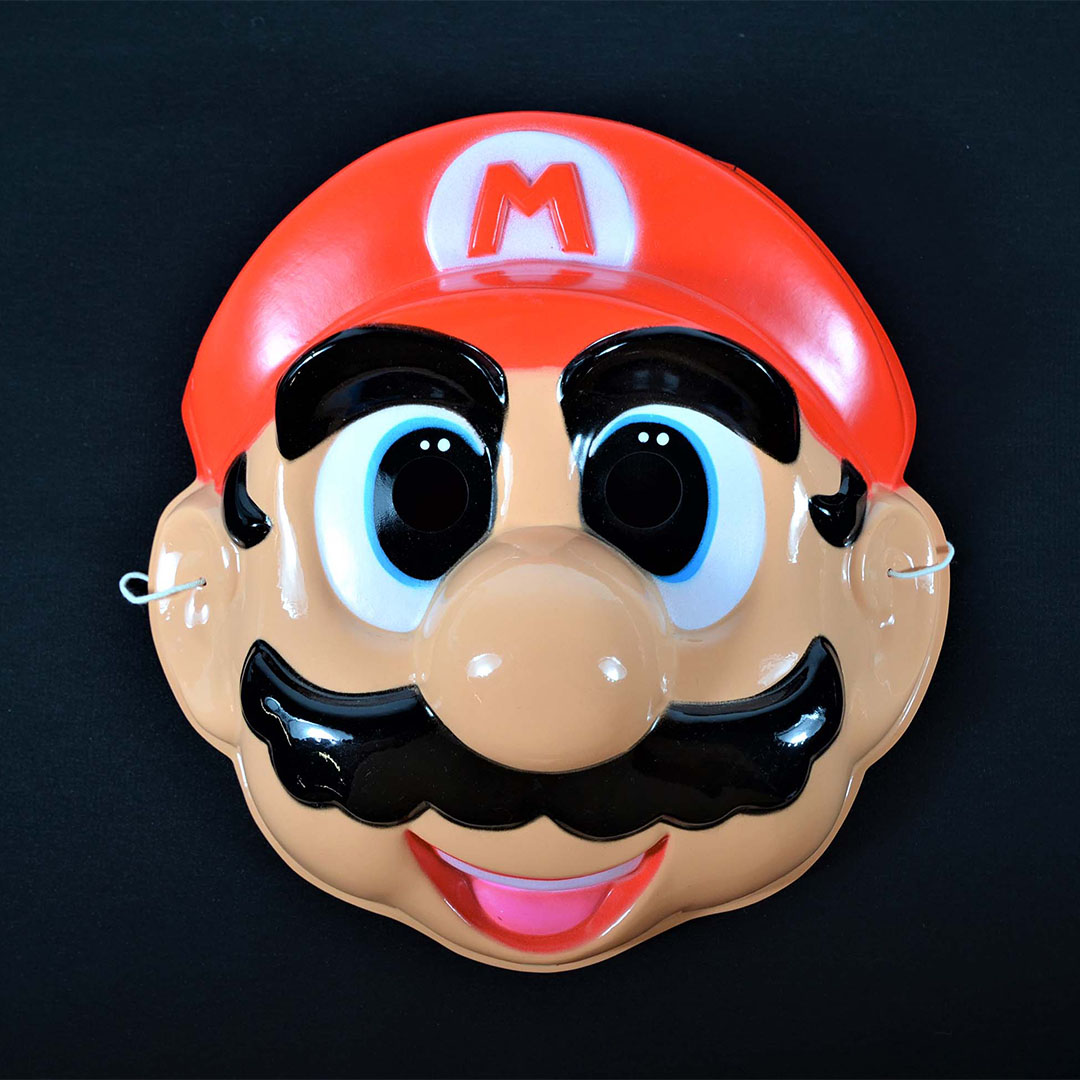 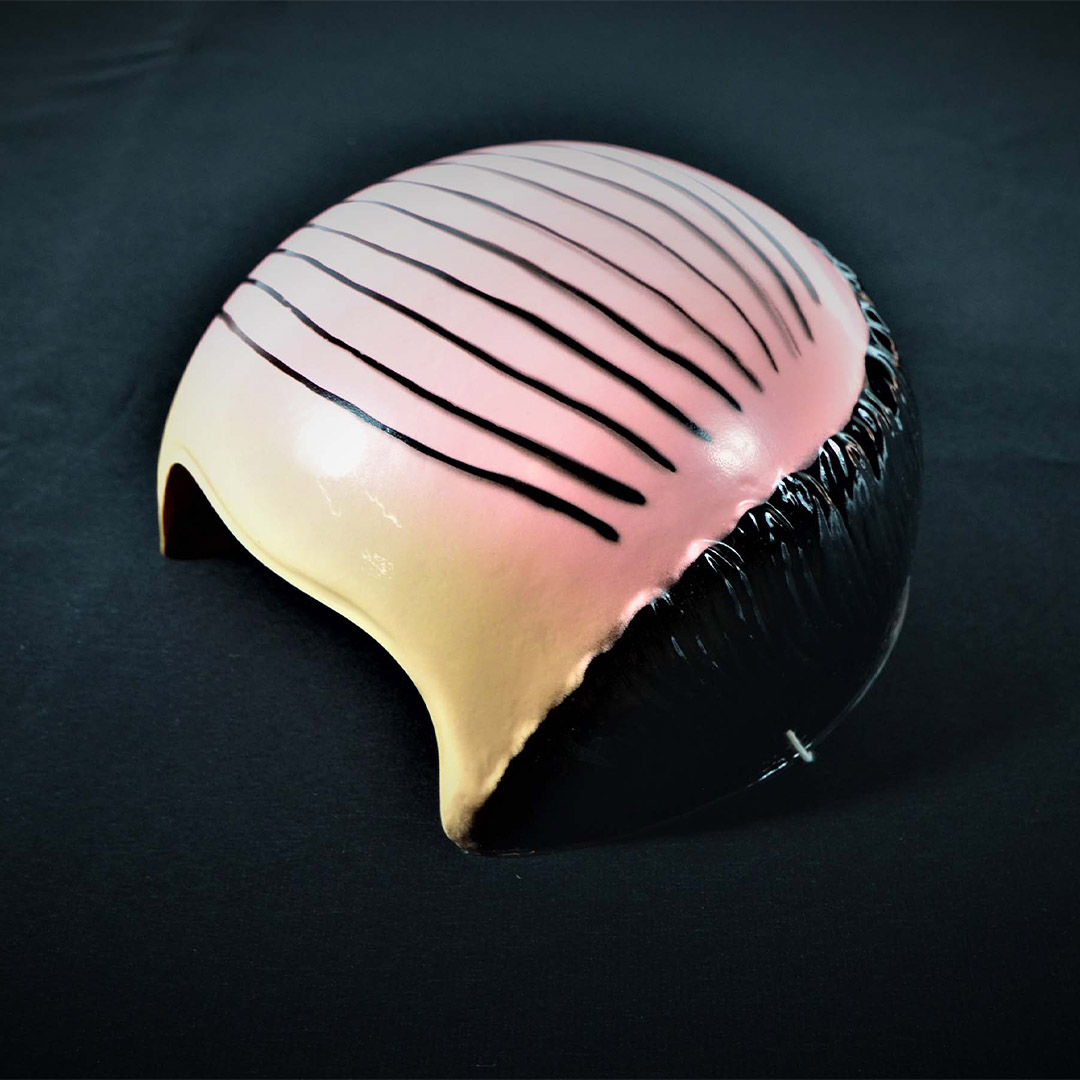 An example of a ‘joke mask’ that makes you appear bald. 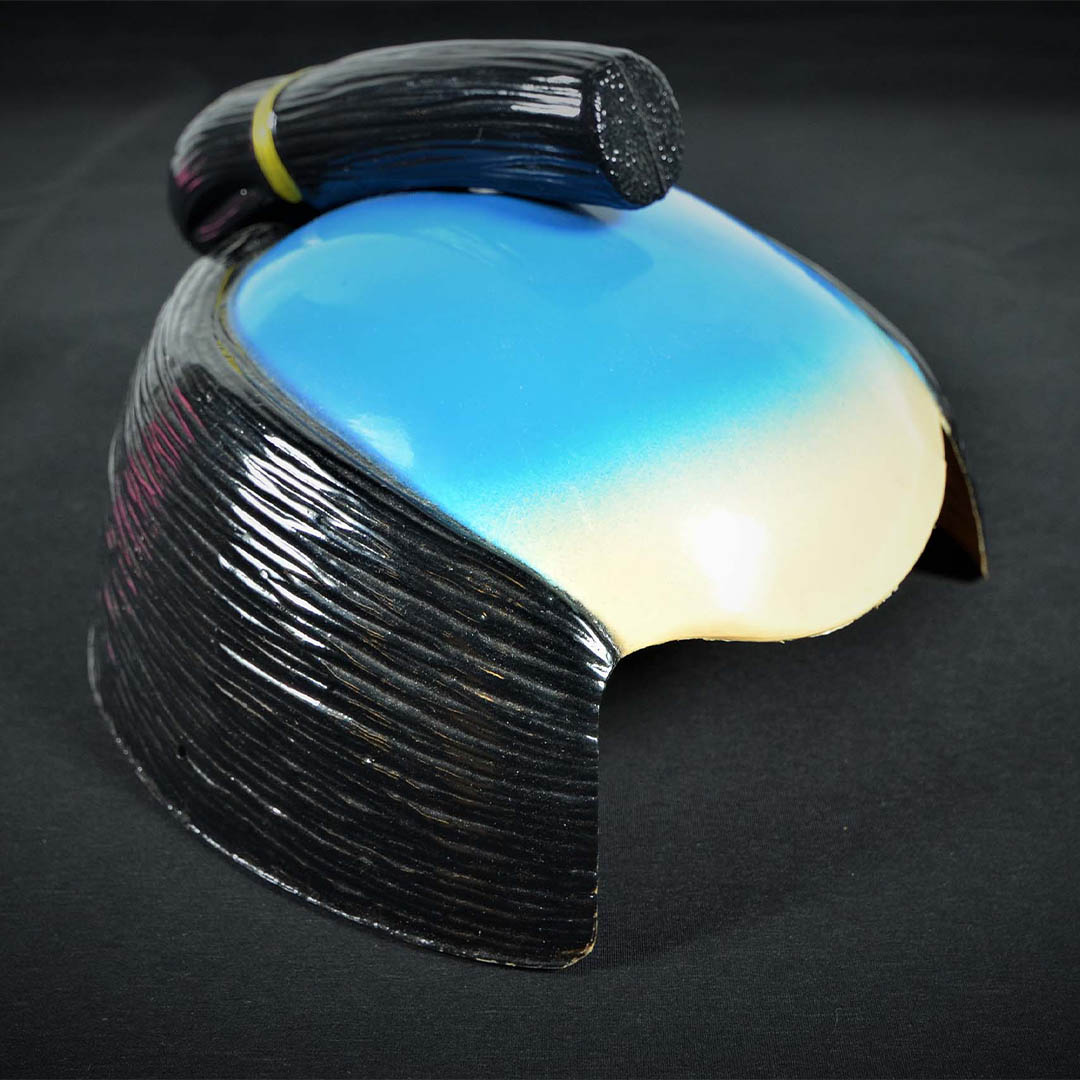 This is a hat, but helps to disguise you as a samurai with his topknot.

To see more masks like this, and others such as theatrical masks and samurai facial armor, visit the exhibition Collecting Stories on-view to the public in the main gallery November 14, 2020 through April 3, 2021. 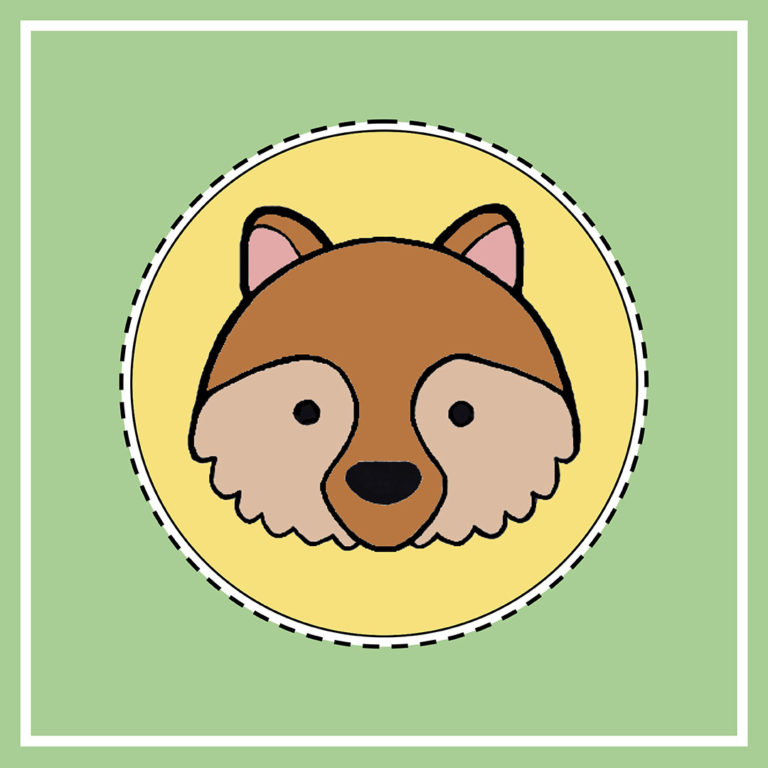 Create your very own tanuki mask.

The History of Kamen Raidaa The Soul of Anime: Collaborative Creativity and Japan’s Media Success Story The papier-mâché techniques of Igarashi Kenji Japan’s Smart Mask Okame & Hyottoko Anime in America, Disney in Japan A Whisker Away