Dr. Oliver Luther Austin, Jr. (1903-1988) was a famous ornithologist (bird scientist) who lived in Japan for several years during the U.S. occupation era (1945-1952). He studied at Harvard University and when he graduated, he received their first doctorate in Ornithology in 1931. (Similar to Jo Sakai, founder of the Yamato Colony, who was in the first graduating class of New York University from the School of Commerce, Accounting and Finance in 1903.) He joined the U.S. Navy in 1942 and spent one year in Korea before joining General MacArthur’s personal staff to head the Wildlife Branch of the occupation government from 1946-1949. After returning to his home in Cape Cod in 1950, he wrote The Birds of Japan: Their Status and Distribution, published in 1953 together with the Marquis Kuroda Nagahisa (1915-2009). He spent a few years teaching at the Air University at Maxwell Air Force Base in Montgomery, Alabama. From 1955-1956 he was part of Admiral Richard E. Byrd’s “Operation Deep Freeze” exploring and protecting the Antarctic. (Laurence Gould, former Yamato School teacher, was also on this expedition.) In 1957, he and his wife, Elizabeth, moved to Gainesville where he became a curator at the Florida State Museum – now called Florida Museum of Natural History – from 1957 into the mid-1980s.

During those years, Dr. and Mrs. Austin developed a reputation for their international dinner parties. A small lacquer box in the Morikami Museum Collection is testament to this history. The box is constructed using, takamakie (or raised-sprinkled picture), a traditional Japanese lacquer technique. It features a design of a flowering tree, pine trees, and distant mountains. Inside the box are 26 tanzaku – a thick, cardboard stock cut into vertically narrow strips used for things like writing poetry or getting autographs signed – filled with personal notes to the hosts, poetry, and even beautiful paintings. Some of the notes are dated and range from March 20, 1953 to July 12, 1962. They are written in several different languages including: Japanese, Korean, Chinese, French, German, and English. This beautiful box and collection of letters is a window into the personal life of an important figure in the Florida-Japan connection. 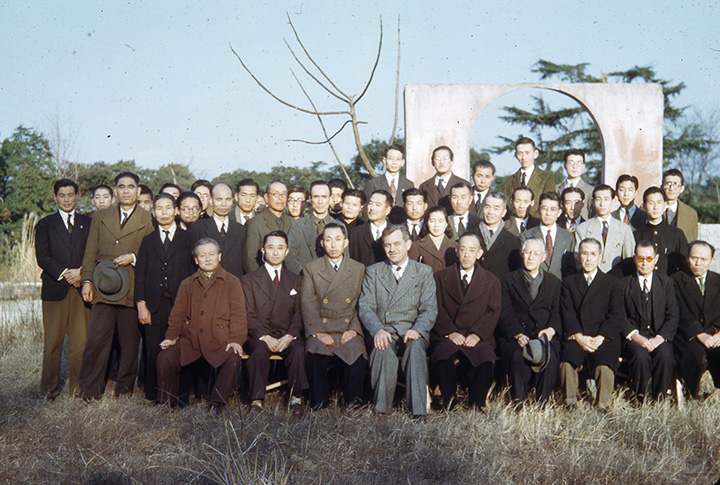 Courtesy of the Institute of WWII and the

One of the notecards is a lovely painting composed of a goose flying over autumn grasses with a full moon in the distance. This piece also has a poetic inscription (as yet, untranslated) and is signed by a Mr. Ueno. He also included his hanko, or personal seal (usually a cinnabar color), and dated the piece to the 9th month of the Shōwa period, or September 1959. Another notecard featuring a painting is by none other than the Marquis Kuroda Nagahisa, Dr. Austin’s co-author for The Birds of Japan, and dated July 12, 1962. It depicts two female frigate birds flying over water with a flock of birds in the distance. Across the top of this card written in English and Japanese is, “In memory of Dry Tortugas.”

Some examples contain only writing with many in Japanese and English. One reads in Japanese, “Seishin ittō nani goto ka narazaran,” with the translation in English on the reverse, “Where there’s a will, there’s a way,” signed by Kobayashi Teruo, February 13, 1960. Yet another is inscribed in Japanese, “Yama yo iwa yo warera ga yadori,” which translates to “Oh! Mountain. Oh! Rocks. Our dwelling…” and is possibly a quote from a Japanese choral group called, Dark Ducks, which had released a popular song called Ode to a Snowy Mountain in 1951 that featured a very similar lyric. This particular card is signed Nakagawa Fumio in Japanese on the front, then in English on the reverse are the lyrics, his name, and the words, “Kyoto, Japan.” Another example of a note that is in both Japanese and English is one by Dr. Matsubayashi Hisakichi of Keio Medical School in Tokyo. In brushed calligraphy, he added the saying in Japanese, “Kagaku ni kokkyo nashi,” on the front and the English translation, “In science there are no boundaries,” (or specifically national borders) on the reverse.

An interesting grouping of notecards is signed by military men and coincides with the time Dr. Austin was serving at the Air University at Maxwell Air Force Base in Alabama. One card is inscribed only in Japanese with a four-character compound that reads, “Chyūkun aikoku,” and means, “Loyalty and patriotism,” signed Major Inaka. Another has a Japanese poem that roughly translates to, “Child of an old bird, that flock in the distance, the bird flies away.” In English the author has added, “4 Apr. ’56 TAKAHASHI YAGI Maj, Japan, A.F. at Montgomery, ALA.”  Yet another features the Japanese poem by the beloved Matsuo Bashō (1644-1694) that can be translated to, “Ancient pond, frog jumps in, the sound of water,” signed in both Japanese and English by Major Hosoya, Japan, and also dated 4 April 1956.

Surprisingly, there are six notes written in Korean that date to shortly after the Korean War had ended, 1953 and 1954. An example is an inscription in Korean that translates to, “In a beautiful place, with beautiful people, one guest receives so much joy – be happy,” signed by Shin Sangcheol in Korean and English. A second card penned in Korean and roughly translates to, “Under a mighty wing there is peace,” signed Kim, T.M. This author has added, “To Mr. & Mrs.” in English followed by their name in Korean pronounced, ‘O-su-tting.’

Another grouping that ought to be mentioned relates to several famous ornithologists who lived and worked in South Florida. One of the most prominent among them was Glen Everett Woolfenden (1930-2007). He helped to organize spring and fall annual tern banding expeditions to the Dry Tortugas from 1964 into the 1980s. Woolfenden has signed two separate entries, one dated very lightly in pencil as “18 Apr. 1958” and the other in ink as “Feb-5-’59.” Dennis Paulson (b. 1937), another ornithologist who grew up in Florida and got his PhD in Zoology from the University of Miami in 1966, also signed two separate note cards. The first is dated to Sept. 1958 and has the inscription, “A combination of successful research trip and wonderful hospitality is all that could be asked so thanks and thanks…” The second is simply his signature along with other guests dated Sept. 17, 1958 (see next section, under “I saw the gator!”)

Some other notes of interest include Richard E. Amundsen (1928-1997), who was a wildlife illustrator and worked with both Dr. & Mrs. Austin on their publication, The Random House Book of Birds, originally published in 1970. His notecard features a beautiful painting of cherry blossoms in snow with a Japanese signature and seal on the front and an English inscription on the back, “The Austins, The magnificent human beings. They have been an inspiration as well as a great help,” dated 12-13 (or possibly 18)-68. There is even an entry from Anthony Austin, Dr. Austin’s eldest of two sons, and his signature is found under the quote, “I SAW THE GATOR,” dated 1 Feb., ’55.

It was Anthony Austin who donated many of his parent’s belongings to the Florida Natural Museum of History. Items like a charming set of whistles shaped like various birds – the sound that each whistle makes is identical to the bird that the whistle represents. Mrs. Austin contributed with several bird shapes among the large collection of hashioki (chopstick rests) that she amassed during their time in Japan. There is also a fine painting done in the ‘boneless’ technique (without an outline) depicting a heron atop a large branch. Dr. Austin was also pivotal in starting the first “Love of Birds Day” in Japan from 1948. In 2000, these items along with objects from other donors were transferred from the Florida Museum of Natural History to the Broward College Museum. In 2017, this museum closed its doors and they offered the Morikami Museum hundreds of items associated with Japan. This fascinating selection of objects from Dr. Oliver L. Austin, Jr. helps us expand our mission to highlight Japanese and American connections and find new links to important figures in Florida’s past. 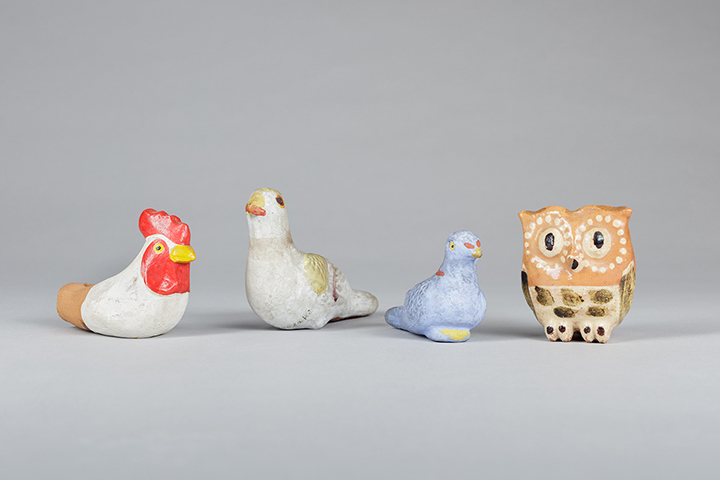 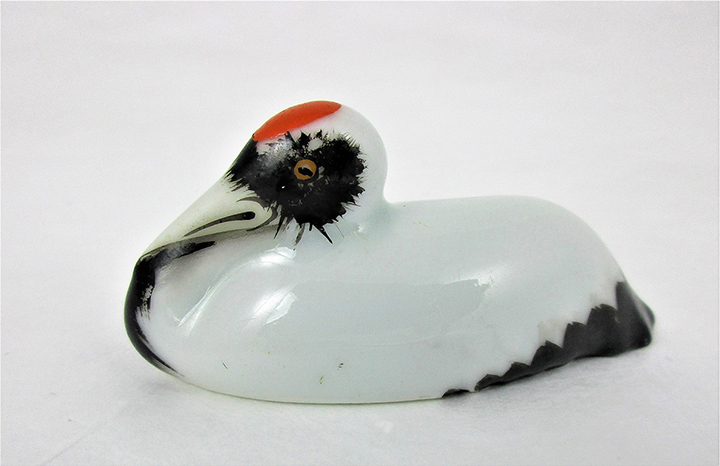 Hashioki (chopstick rest) in shape of a crane 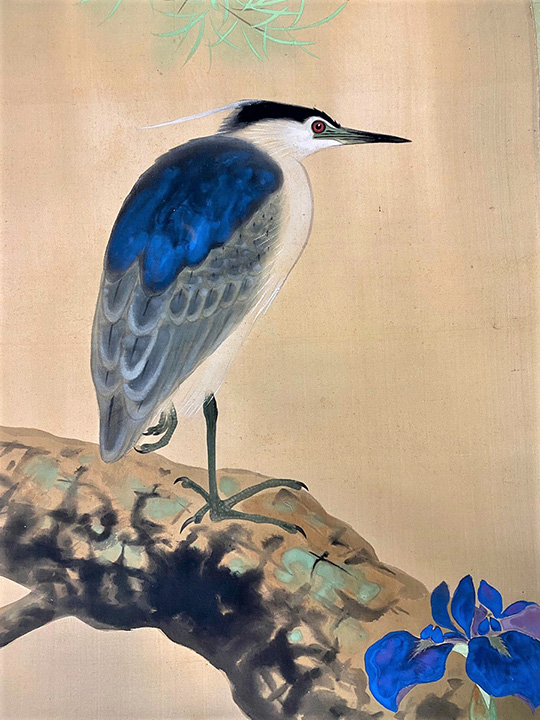 Heron on a branch (detail)

Signed; name not yet translated

Ink and pigments on silk 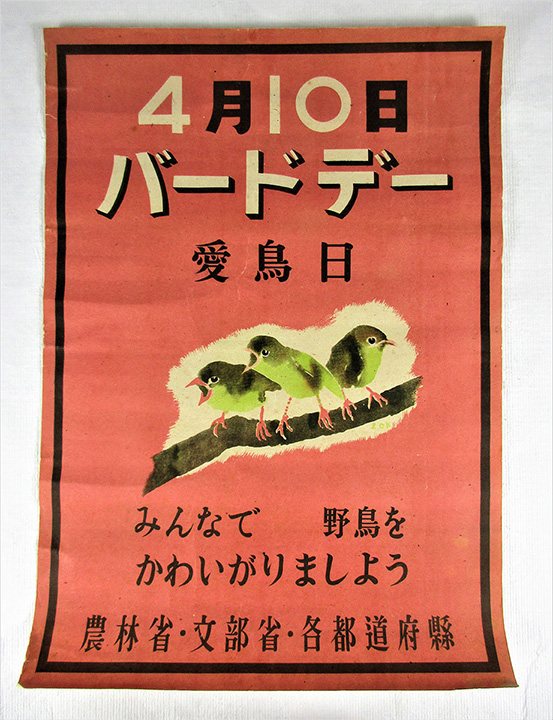