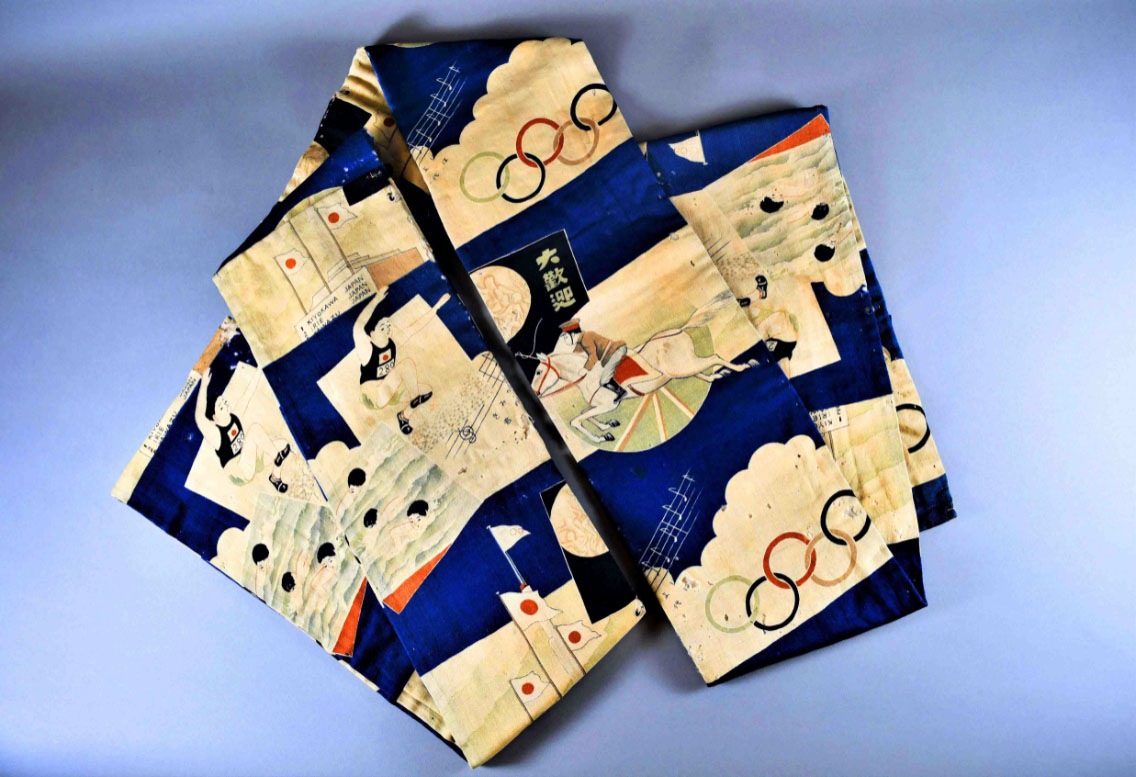 In 1936, Tokyo was selected to host the 1940 Summer Olympics. This was the first time a non-Western country had ever been chosen. Japanese organizers saw this as an opportunity to generate international good will after Japan’s empire had invaded Manchuria and withdrawn from the League of Nations. By 1938, Japan was forced to forfeit the invitation under mounting criticism of the country’s aggressive militaristic expansionism and threats of boycotts by Great Britain and the U.S. The same fate befell the Winter Olympics, which had been awarded to Sapporo, Japan. This became known as the “Missing” or “Phantom” Olympics.

In the two years leading up to the cancellation, Japan embraced the opportunity to demonstrate cultural pride, strength, and modernity. In addition to building race courses and hotels, artists were engaged to create memorabilia in the form of posters, flags, medallions, cups, and articles of clothing. The design on this young boy’s obi is a wonderful example of the dreams of victory that swept the population. The montage shows athletes competing in swimming, jumping, and equestrian events against a backdrop of a large “welcome” banner (Daikangei!), Japanese flags, the Olympic insignia, a scoreboard, and the partial lyrics to Kimigayo (His Majesty’s Reign), Japan’s national anthem.

Japan was expected to have a particularly strong showing in swimming, track, and equestrian events. Just a few years prior, in the 1932 Olympics in Los Angeles, Japan took 18 medals, 12 of those went to swimmers, including 7 gold. Takeichi Nishi, a debonair officer of the Imperial Japanese Army, won gold in equestrian show jumping. Those victories were followed with pride by Japanese communities all across America. The American press celebrated these athletes and, for the first time, many Americans of Japanese ancestry experienced a noticeable softening of prejudice and episodes of overt racism. 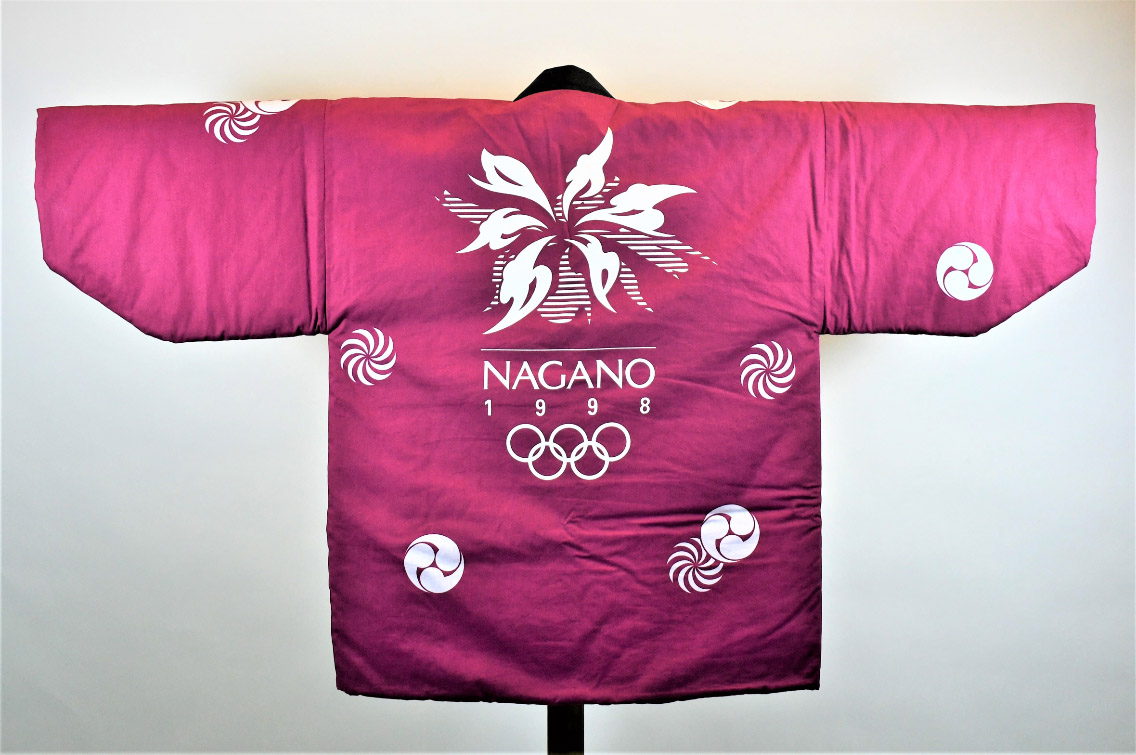 The beautiful, mountainous city of Nagano in central Honshu was the site of the 1998 Olympic Winter Games. These 18th Winter Games were notorious for successive snowstorms and an earthquake that caused many delays, but also notable for the addition of two new sports: snowboarding and curling. Japan was represented by 166 athletes (100 men and 66 women) and the team won five gold medals, one silver medal and four bronze medals. It was the first time Japan had won multiple gold medals. With the triumph of Tae Satoya in the moguls event in freestyle skiing, she became the first Japanese female in Olympic Winter Games’ history to win gold.

The motto of Nagano 1998 was “coexistence with nature” (shizen to no kyōzon). Throughout the Games a high degree of attention was devoted to various environmental issues and this sentiment was reflected in the design of official memorabilia, as well. Pictured is quilt-lined, padded jacket that not only helped to keep spectators warm, but also created a colorful canvas for the display of the official insignia of the XVIII Olympic Winter Games. Designed by Japanese artist Masuteru Aoba (1939-2011), the stylized snow flower (or snowflake) symbolizes the harmony of the Games with nature. Each petal represents an athlete participating in a winter sport.

Learn more about past and present Japanese-American Olympians, and discover some of the country’s favorite games and pastimes with the links provided below: