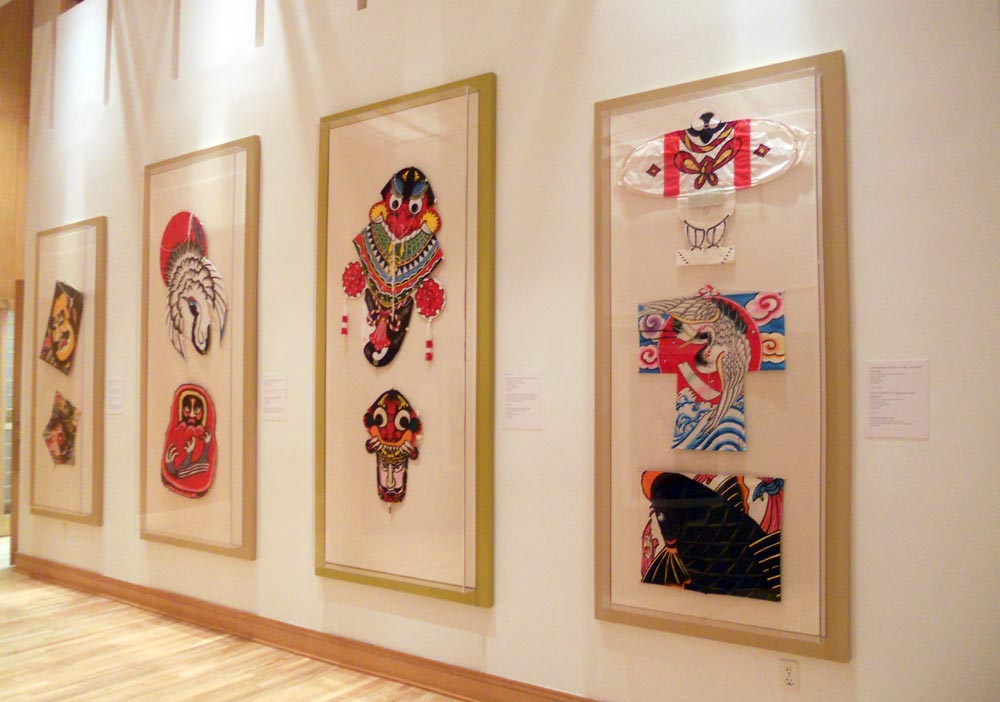 High-flying, colorful constructions of paper and bamboo, Japanese kites are the products of artist-craftsmen following several centuries of inherited tradition.

First mentioned in the 10th century dictionary Wamyō Ruijūshō, kites and kite-flying were introduced from China as early as the 8th century. Kites were first called shiroshi or shien, referring to the hawk-like bird coincidentally called a kite in English. Kite-flying was a diversion practiced by the nobility during the Heian Period (794 – 1185), but early Japanese kites were used for religious and military purposes as well. Kites were flown to appease the wishes of the gods and to pray for successful harvests and healthy children, purposes for which they continue to be used today.

Kite-making as a profession began to develop in provincial castle towns at the end of the 16th century. Regional kite-making traditions thrived during the two-and-a-half-century Edo Period (1600 – 1868) that followed, as kite-flying became popular among the growing urban population.

Some kites were made in the shape of a squid (ika), inspired by the most prevalent name for them at the time, ika-nobori (written with characters used for shien, meaning paper hawk). In Edo (present-day Tokyo) squid-shaped kites came to be called tako (octopus), a word that came to mean any kite. At the same time a new character was developed for the written language to distinguish this additional meaning of tako. Today it is the term for kite most widely used in Japan, although as kite scholar Tsutomu Hiroi points out, at least sixteen regional terms also mean kite in Japanese.

Kite-making continues to be carried on in local craft traditions that exist from one end of Japan to the other. These traditions dictate the form and decoration of local products and differentiate them from others. While dozens of kite-making centers exist, three broad types of kites are distinguishable according to place of origin. Hiroi calls these the “northern” type (kite designs which migrated from northern mainland Asia), the “southern” type (those which derive from southern Asia and Indonesia), and the indigenous type (designs evolved solely within Japan).

The first type includes the baramon, magoji, and oniyozu kites, principally known for their intricate framing structure and complex shapes that require tails to retain equilibrium in flight. The popular yakko, or footman design, is also a “northern” kite. The second type is exemplified by the Nagasaki hata, a simple diamond-shaped kite that may have derived from a primitive kite made from a leaf. The stability of these kites in flight requires no tail. Both “northern” and “southern” kites, although found throughout Japan, predominate in the southwestern region of the country.

The indigenous kite is based on simple geometric shapes like rectangles and hexagons, and includes the Edo and Sanjō rokkaku kites. Indigenous designs predominate in northeastern Japan.

The most influential of all Japanese kite-making traditions was that of Edo. Not only did its name for kite spread to other areas of the country, the relatively simple construction of Edo kites and their wide range of motifs drawing from history and legend had an impact on regionally made kites everywhere. Fierce, wild-eyed warriors predominated on these kites, which drew considerable inspiration from the ukiyo-e woodblock prints also produced in Edo through much of the 18th and 19th centuries. Today, such kites offer a unique look at Japanese values, legends and history.